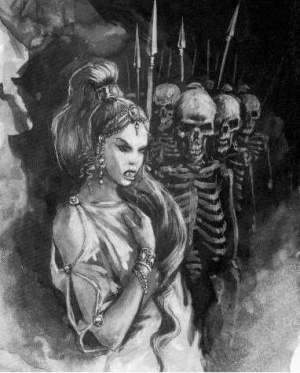 The Lahmian Sisterhood is a cabal of vampires under the rule of Neferata, former queen of Lahmia.

After the death of her brother and husband king Lamashizzar in -1597 IC, Neferata had orphan girls raised as priestesses in a new temple to Asaph in ancient Lahmia, trained to serve Neferata as the living avatar of the goddess. They wore golden masks of the goddess, modelled on the queens face and robes of samite. Each initiate surrendered a small portion of blood every night which Neferata ritually drank three times a day, the priestess presenting it withe words: For you, holy one. An offer of love, and life eternal.

A great temple had been converted from the women's palace and [10a] they used a version of the Elixir of Life which they called the Asaph's Kiss. [11b] The Temple of Blood became a fortress within the palace, guarded day and night by members of the Queen's lifguard but there were many ways to enter or leave unseen. [11b] The priestesses had little or no self-determination or will but were absolutely loyal to Neferata. [11c]

In the years following the fall of Lahmia, Neferata surrounded herself with a group of vampiric servants who, despite being vicious and savage warriors and competent necromancers, showed their true strengths in the areas of seduction, infiltration, intelligence gathering and manipulation. Their time in Mourkain allowed them to hone these skills to supernatural levels and by the time the vampire queen took the mountain fortress of the Silver Pinnacle from the Dwarfs and made it her own, these vampires and becomes true masters of their arts.

Having long ago decided that directly ruling the lands of the living was impossible for the dead, Neferata instead decided that ruling from the shadows and being the power behind the throne was even better. She took the most beautiful, seductive, intelligent and manipulative of her servants and sent this sisterhood out across the lands of men, inserting them into every facet of society. From Imperial generals to Bretonnian Grail Knights, from Kislevite Boyars to Arabyan Caliphs, behind almost every man of power stood a pale and beautiful wife, courtesan, mistress or other significant figure. [9a]

Neferata had learnt that one did not have to be a ruler to rule. Instead her web gave her influence unparalleled and for centuries she became the secret queen of an unseen empire.[9a]

The Sisterhoods goal is to fulfill the desire of Neferata to return home in glory, dwelling in Lahmia with a population of devoted and willing mortal slaves. The Sisterhood also seek to foil the schemes of other vampires, in particular the Von Carsteins who seek their own dominion over mankind. [9a]

The Lahmians also assist and strengthen humanity against the threat of Chaos. [9a]

Most Lahmians dwell in alongside humans with a network that threads through their society with Neferata at the pinnacle, receiving reports through intermediaries, messengers and magical means. [9a]

Those in favour are granted the title Nuncio, acting as diplomats and envoys as they seek to shape history to suit their mistress. Humans and vampires alike form a loyal household around each with the former helping to convey normality to the mortals they interact with. Moving in high society is easier than many believe as the ruling class of the Empire and other human nations interact and entertain in the evening through to the early hours. [9a]

Members of the Sisterhood are taught how to avoid mirrors or for those with an aversion to them, how to avoid flinching in the presence of a Holy symbol. [9a]

For the most part, the vampires of the sisterhood feed on willing victims - either those believing they are engaging in a torrid affair with the Lahmian or devoted servants who often hope to join them in undeath. [9a]

The handmaidens who dwell at Silver Pinnacle, practising their skills and vieing for the attention and favour of their queen. [9a]