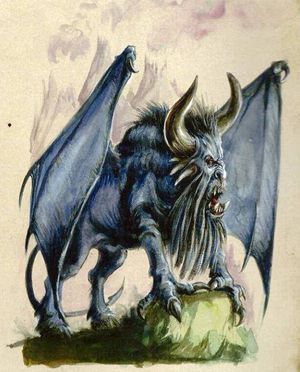 A Lammasu is thought to be a rare and interesting mutation of the Great Tauri. [3a]

It is not consumed by fiery rage, but is a manifestation of sorcerous intelligence. Though not as powerful as its cousin in combat, the Lammasu is able to employ magic instead, launching fireballs at the enemy, transporting allies on shadowy mounts in a blink or simply letting death creep through enemy ranks.

They are also blessed with a uncanny, insidious charisma that can befuddle enemies. [3a]

While it takes a great amount of power to summon one, the wizards who invest it will not be disappointed, which is why many Chaos Dwarf sorcerers of a sufficient rank use them as their mounts.[2]

Lammasu are able to use the Lores of Death, Fire or Shadow. [3a]

Not only are they able to cast magic, but a Lammasu is also incredibly resilient to its effects, with the vilest spells often dissipating upon contact with the miasma of sorcery around him. This same miasma also negates the enchantments inside the enemy weapons, be it a life-draining Wight Blade or a deft Lance of Quest, shocking their enemies to Lammasu's delight.[1][3a]