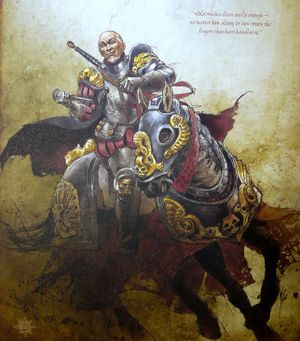 Leitpold the Black is a Mercenary General, wanted criminal and dastardly sell-sword. [1c]

Leitpold a man to whom profit is more valued than honour or loyalty and he is renowned across the Old World for his bloodthirsty and treacherous exploits. Lietpold is a vain, arrogant, vicious, paranoid and cruel despot and was as bloody a tyrant as any in the Border Princes. [1c]

Leitpold is wanted by several noble houses of the Empire. [1b]

He has fought across the Old World from Kislev to the plains of Estalia and on several occasions he and his men have turned on their erstwhile employers when they received a better offer from their enemy. This meant he was little trusted and also gained many enemies so he moved south and managed to take the crown of a petty realm in the Border Princes, Raven Barrow. [1c]

When the great horde of Tamurkhan entered the Border Princes, he headed the army of the Confederation of the Eagle but even the well trained pikemen and cavalry could not slow never mind halt the vast force. Seeign the battle was lost, he inspired his men to hold the line, claiming he would shortly return with reinforcements but in reality their deaths gave him time to escape! [1a]

He reached the fortress of Mendhelhof which guarded Black Fire Pass and convinced the Castellan that a great threat to the Empire was looming. [1b]

Leitpold has spent vast sums of money on magical amulets, spells to protect him from harm and maintain his youth and vigour. However, these all combine to become a threat to his life or sanity should they go wrong. Together these are known as the Blessings of Lethe. [1c]