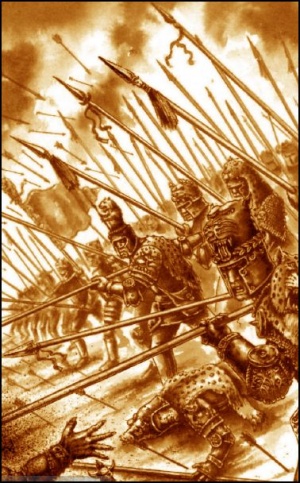 Leopold's Leopard Company are a famous band of Dogs of War mercenaries that had's its origins within the great city-state of Luccini.

The Leopard Company takes its name from the legendary Leopard of Luccini, which is a badge and the mascot of the city's rulers. [1a]

Proceeds to the Luccini temple's restoration fund. [1a]

It is said that this Leopard was a guardian of the divine twins Lucan and Luccini, founders of the city from time long ago. According to legend, the twins became lost in the wilderness when they were still only children and took refuge within a cave carved inside a massive rocks, later to be the acropolis of the city. The cave was the lair of a leopard, but this was no ordinary leopard, she was a mystical creature with two heads and three tails! She has the mystical ability to speak prophecies from one of her heads and warnings from the other.[1a]

The Leopard protected the twins just as if they were her own cubs for many years until shepherds finally found the infants. It was said that upon their entrance to the cave, there laid within the entrance piles of bone from varying groups of creatures that had tried to invade the Leopard's home. According to the myth, the Leopard prophesied that Lucan and Luccina would found a great city on the rock and rule it as king and queen.[1a]

Then the other head warned that the descendants of the twins would fight each other for the realm for all eternity. After having thusly spoken, the Leopard ventured deeper into the cave, and was never heard from again. The temple of Lucan and Luccina was built over the cave in which credulous people believed the leopard lives. The guardians of the temple, hired by the priest and paid for by pious donations from the merchants of the city, were called the Leopard Company because of their sworn duty to guard the acropolis as ferociously as the leopard these men proudly wear.[1a]

Unfortunately, there was always fighting in the principality between the two lines claiming descent from Lucan and Luccina. This only ended recently when the famed Lorenzo Lupo claimed descent from both lines and anyone who denied this claim where either found dead or had since fled the city. Unfortunately for them, the priest of the temple of Lucan and Luccina supported the claim of another of Lorenzo's rivals, the esteemed Leopold who claimed to be a direct descendant of Lucan. Under Leopold's command, the Leopard Company held the acropolis for many days against Lorenzo's troops. The state of civil war and unrest persisted until the priests consulted the oracle of Luccina for a final solution to this problem -- which came down in favor of Lorenzo, albeit a very cryptic augury. The priest promptly cast the Leopard Company from their employment in an effort to placate the vengeful Lorenzo. The soldiers had grown use to the extremely good pay in gold, the well garbed uniform clothing and enjoyed the best that the city could provide in food, wine and entertainment that they became furious at this sudden betrayal.[1a]

Consequently the Leopard Company, forgetting their sacred duty, broke down the golden doors of the temple itself, and took the pay owed to them from the priests who were thrown off the great acropolis and into the seas below. Then they defiantly held out against Lorenzo for a further two weeks of bloody siege. Finally, Lorenzo -- tired of the fighting and the cost of rulership, decided to offer Leopold a deal he cannot refuse. He would allow Leopold and the Leopard Company to march out of the city in return for ending the siege and promising never to make war on him or return to the city ever again. Leopold reluctantly set aside his claim under pressure from his men who wanted to get away with the gold from the temple rather then die within the city walls. As they left the city, some of the men were afraid that they had offended the gods by their desecration and were anxious to leave the acropolis before divine vengeance struck them down, possibly in the form of a rampant two-headed Leopard.[1a]

And so the regiment marched out of Tilea and took service with various other Princes. After much hard campaigning, the regiments had been mauled time in again in many unlucky battles, the worst in many years. The superstitious soldiers speculated this as the vengeance of the Leopard which they had sworn to protect and whose temple they had pillaged and desecrated. Leopold, anxious to hold his regiment together, called a meeting on the stricken battlefield of Terramorta and told his men they must regain the favor of the gods. So they voted to appease the Leopard by sending back a portion of everything that they have captured or earned as loot back to the temple of Luccini in the hopes of the leopard showing mercy to her once loyal guardians. The next battle ended in an overwhelming victory against all odds, with the Leopard Company taking the lions share, or rather the Leopards share of the Loot! For Leopoldo, it earned him the nickname of "di Luccini" meaning "the fortunate". Since then the regiment has gone from strength to strength fighting many far distant lands and wining many many battles for years to come, but these pious man will always remembering to send something back for the coffers of the priest of the temple of Luccini, as they promised.[1a]

The Company can be hired by any army except Bretonnia. [2a]