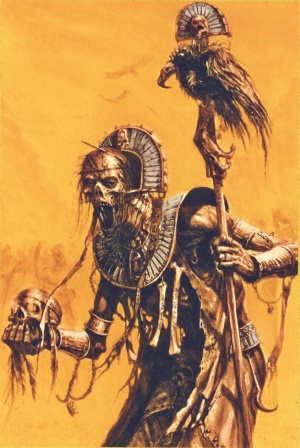 The Liche Priests are servants of the Tomb Kings of Khemri and the officals of the Mortuary Cult. [1a][2a]

They are undying, preserved by forbidden magics long past their natural life-spans would have allowed. They resemble a Mummy with dry wizened skin stretched over their bones. [1a]

The first Liche Priests originated in the founding of the Mortuary Cult by the Tomb Kings. They were obsessed with finding a way to overcome death and that was the job of the Mortuary Cult. They were commanded by Settra to find a way to make him immortal, never to die. They failed but in the process found ways of extending their lives. It was in the reign of Utep that the priests learnt great secrets and didn't die. They are likely to be the same priests who serve the Tomb Kings now. They are supposedly the fifth dynasty of priests who didn't die.

They were quite safe in Nehekhara for not even the king could execute them as he required them to protect his body and lengthen his life as much as possible. This way the cult became a very powerful force behind the throne. They also have the duty of tending to the Liche High Priest at the heart of every temple on every necropolis. They must perform various rituals of communication with the dead and repairing parchments of vital information. [1a]

Due to their knowledge they have formidable magical powers and are said to be the ones controlling the king, or at least keeping him from death. Without a priest, an army gradually falls to dust, skeleton warriors collapsing to piles of bones all around. They can also cast spells of devastating power that most other races are completely unaware of.[2a]

The Liche High Priests are the most knowledgeable of all the Liche Priests and are served by many lesser priests within the temple dedicated to the king's Mortuary Cult in very Necropolis. Each priest has a number of tasks to perform, including the Ritual of Awakening, renewing seals on tomb vault portals, remaking inscriptions, deciding the moment of awakening and communicating with the spirit of the Tomb King using oracles.

None can die a natural death and are protected from all enemies for if they fall, so does the rest of the army, including the Kings. Their skin is stretched tight over their bones, likely to rip or drop off at any moment.[1a]

There have been several Liche High Priests of note, including Nagash and Khatep.