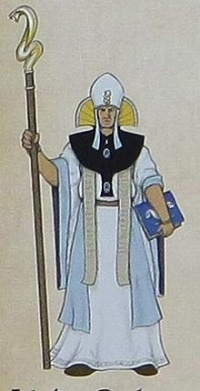 A wizard of the Light Order

The Light Order is one of the eight Colleges of Magic who train Wizards in The Empire. Light wizards are specialists with light and brightness, and as a result have are regarded among the wisest men in the Old World, their counsel being sought from the other nations of men. Light wizards are the most skilled of all the orders in medicine, healing and protection. Of all the orders they are the most renowned for conducting ceremonies and rituals. The Light order's building in the college is mostly invisible to the normal folk of Altdorf but is a vast pyramid with a multitude of tunnels beneath. The Lore of Magic they study is the Lore of Light.