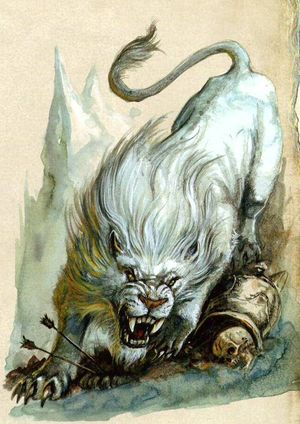 a White Lion of Chrace

Lions are big cats that live and hunt in prides. [1a]

Huge and cunning predators that prowl the forests of Chrace on Ulthuan, they are almost as large as an Elven Steed and when a pride is hunting, no creature within their territory are safe. They are fiercly loyal to those in their pride - a ttait that has give rise to many High Elf poems and songs. [1a]

Despite their dangerous nature, the elves do nto regard them as evil but either beasts to feared but respected or occassionally a creature to be nutured. High Elf Mages have been known to bind entire prides when they march to war but they are not easily controlled. [1a]

Some of these Mages have formed bonds with controlled Lions of Chrace that have remained even after the rite of binding has faded - giving them a unique and formidable bodyguard. [1a]