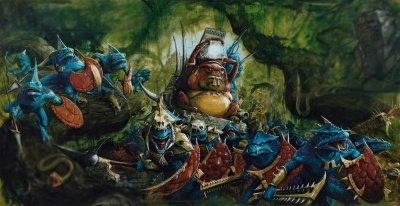 The cold blooded Lizardmen are the oldest nation of the Warhammer world, servants of the enigmatic Old Ones. Most Lizardmen dwell in the southern part of the New World known as Lustria, a tropical continent which is mostly covered in jungles and dotted with the monolithic Temple-Cities of the Lizardmen.

The Lizardmen are not a single race but actually four: the powerful and enigmatic Slann; the disciplined, warlike Saurus; the clever and agile Skinks; and the large, brutish Kroxigor. Lizardmen are not born, and they do not reproduce in the normal manner. Instead they are birthed from ancient Spawning Pools deep within their Temple-Cities. Lizardmen emerge from the Spawning Pools fully grown and with instinctual knowledge. Often, in times of need, special spawnings will produce Lizardmen with unusual abilities, such as Saurus with an instinctual ability to tame and ride Cold Ones.

The Lizardmen serve the Old Ones, enormously powerful beings who sailed across the stars on silver ships to reach this world. When their polar warp gates collapsed, the Old Ones disappeared, and the first generation of Slann - those who had communicated directly with their godlike masters - all perished. Thus the remaining Lizardmen were left to interpret the Great Plan through deep meditation and lost stone tablets. The Lizardmen do not even know the names of many Old Ones.

Most vestiges of the unlimited power and technology of the Old Ones have been lost, although the Lizardmen still guard a few objects such as the Device of the Great Beyond, through which voices will occasionally speak from across the stars. Notably the Solar Engine operated on Bastiladons by Skinks has a slot for a 5-digit hand, while Skinks only have 3.

The Lizardmen often ride the reptilian beasts of Lustria, such as Stegadons, into battle. Being servants of the Old Ones, the Lizardmen seek to enact the Great Plan and bring order to the world. As such, they are staunch opponents of Chaos and the forces of destruction. Lizardmen particularly hate Skaven after many long campaigns fought against the children of the Horned Rat. However in spite of this, the Lizardmen are not necessarily friendly towards younger races like Elves and Humans, whom they refer to as "warmbloods". Any warmbloods who set foot in Lustria that are not killed by the dangerous fauna and flora may find death or worse at the hands of the Lizardmen.

Around -15000 IC,[1d] before the ancestors of the Dwarfs and Elves could speak or sing, the Old Ones visited the world via inter-dimensional gates in silver ships. Their chief servants - the Slann came with them. Architects, organisers and techno-mages they created the great cities for their masters, shaped the world itself as required. They also created and maintained permanent portals at the poles and even shifted the orbit of the world to move it closer to the sun. [1a]

Itza, the first city is completed around -10,000 IC[1d] and other vast and wonderous cities (Quetza, Tlax, Tlaxtlan, Xlanhuapec and Zlatlan[1d] are created on the newly warmed and seperated continent of Lustria which suited the Old Ones and their servants best. In time, the ancestors of the Dwarfs and Elves were discovered and nutured - although secretly and at arms length - appearing as creator gods to those races. [1a]

The Slann of the Fouth Spawning correct the Polar Gate and then create the cities of Axlotl, Chaqua, Hexoatl Oyxl, Pahuax, Tlanxla, Xahutec and Xhotl. They then widened the world pond seperating the continents but still worried about the Warp gate, brought forth the Fifth Spawning to assist them. [1d]

However before they could accomplish their taks something went wrong with the gateway which not only collapsed, laying waste to its surroundings but also opened a portal into the Realm of Chaos. [1a][1d]

High and Dark Elves both make expeditions into Lustria but much worse is to come with the plagues that herald the arrival of the Skaven. The Prophecy of Sotek is discovered and eventually Clan Pestilens retreat to the South Lands pursued by the wrath of the Serpent God. [1d]

As Lizardmen grow older, their back scales become harder with some ossifying completely - often taking on a brown, white or yellow tinge. This improves their natural resiliance and in contrast, newly spawned lizardmen tend to have glistening skin. [1b]

The Lizardmen do not use iron prefering to cold hammer copper and gold into objects with bronze being the only metal they forge and only used for equipping elite regiments. The purest gold is sued for sacred artefacts. They create weapons from stone including jade, yellow quartz, red carnelian and obsidian with the skinks being highly skilled in their creation making them as effective as metal blades. [1c]

Head-dresses and helms are often festoned with vivid feathers wholst leaders wear bangles, trinkets and carry stone daggers in the shape of the tongue of Sotek as well as ceremonial gemstone maces. [1c]

The Slann are all powerful mages, undisputed masters of High Magic. Even the lowest of the Slann outclasses the most potent wizards of most other races. Onlt the most learned and highly trained of High Elf Archmages can hope to compete with the Slann for raw power.

While Saurus and Kroxigors are incapable of being wizards at all, Skink Priests are magically adept, and wield magic quite effectively. However, they are often outclassed by the most powerful wizards in other races.

Society and kinds of Lizardmen

The Lizardmen live in a caste society, which each kind having its own specific role in society.

Slann are ancient, bloated toad-like creatures who serve as the rulers and priests of the Lizardmen. The Slann were the original servants of the Old Ones, but none have been spawned since that time. Unable to replace their numbers, the Slann are a dying race. Slann are physically weak, but command immense magical power. Even the lowliest of Slann is a match for the mightiest wizards of other races. Essentially immortal, Slann spend centuries in deep meditation, rousing only to murmur half-spoken prophecies. When in battle Slann are born aloft on floating Palanquins. Other Lizardmen obey the orders of the Slann unquestioningly and protect them with their lives.

Saurus are the warrior-caste of the Lizardmen. Saurus possess hard, scaly skin that acts as natural armour, and are ferocious fighters in battle. Saurus train their entire lives and fight in well-disciplined ranks. Saurus can live for thousands of years, and it has never been known for one to die of old age. Though not stupid, Saurus have a single-minded focus on warfare.

Skinks are small, nimble aquatic reptiles who serve as the artisans and bureaucrats of the Lizardmen. The Slann spend most of their time meditating, so the magical Skink Priests run Lizardmen society. During wartime, Skinks complement the legions of Saurus as auxillary forces. The strange spawning of Chameleon Skinks are excellent scouts who have the ability to camouflage themselves.

Kroxigors are huge, brutish crocodilians who walk upright and are roughly the size of a troll or ogre. Kroxigors do most of the heavy lifting and hard manual labour in lizardmen society. Quite stupid, but extremely loyal, the Kroxigor were responsible for laying the stones in most of the Lizardmen's temple cities. During wartime the Lizardmen use Kroxigors as shock troops, although the savage creatures must have weapons chained to their hands, otherwise they may drop their weapons and attempt to rip the foe apart with tooth and claw alone.

The Empire of the Lizardmen 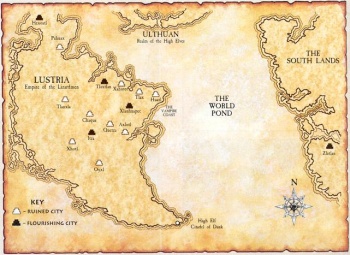 The cities and domains of the Lizardmen.

Most of the Lizardmen live in Lustria, a tropical continent covered mostly in dense jungle and full of dangerous (often poisonous) flora and fauna. The Lizardmen are primarily gathered in towering Temple-Cities which tower above the Lustrian landscape, monolithic step-pyramids dwarfing the surround jungle. Four of these cities, Hexoatl, Tlaxtlan, Xlanhuapec and Itza, are located in Lustria and are able to help and support each other. Itza was the first city founded by the Lizardmen and Old Ones, and indeed is the oldest city in the world. Zlatlan, the fifth inhabited city, lies hidden in the jungles of the Southlands and is completely isolated from all the others, its Slann unable to re-establish contact with those in Lustria.

There are also several abandoned ruined cities such as Chaqua, Xhotl and Quetza. The city of Chupayotl sunk beneath the waves without any invasion at all. There are also many seemingly abandoned holy places and temples, however most of these places are guarded by a suitable garrison or watched over by occasional patrols.

No Slann live in the Dragon Isles, and, lacking their guidance, the local Saurus and Skinks have devolved, becoming savage barbarians.

Forces of the Lizardmen

When the Lizardmen march to war, they bring with them to many reptilian beasts of Lustria. In addition, there are many special varieties of Skinks and Saurus, spawned to have a specific role in battle.

Lizardmen have a tense alliance with the Amazon Sisterhood and often field the warrior-women in battle.