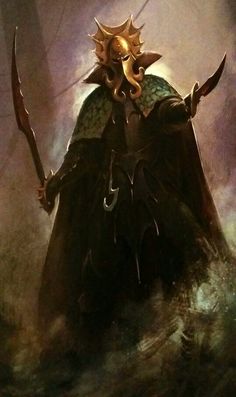 Lokhir Fellheart, the Krakenlord, is a Dark Elf Corsair of noble birth. He comes from a long line of raiders and naval generals. He is a relative of Laithikir Fellheart, a raider and cartographer active in 1103 IC whose maps allowed other Dark Elves to raid the rich coasts of Ind and Cathay.

Some Dark Elves take to the seas in search of plunder or revenge, but many more do so to escape the dangers of Naggaroth. Not so Lokhir Fellheart -- he was born to ply the rolling seas, to bring fire and terror to the shores of other lands. It was his great-great-grandfather, Menreith Fellheart, who first commanded the Black Ark Tower of Blessed Dread, [1b] and the doom-bringing flagship has answered to a Fellheart ever since. Lokhir is the latest in his line to rule over that great vessel of war and, by all accounts, the most daring. [2b]

Following his father's death at an Assassin's hand (which unusually, was not a patricidal commission, the Fellhearts being one of the few Naggarothi families who hold blood to be thicker than water), Lokhir inherited command of both the Tower of Blessed Dread, and its mighty fleet. He acted quickly to ensure both the loyalty of his crew and the favour of Mathlann, by sacrificing the chief troublemakers to the sea god's glory. That very night, with the decks of the Black Ark still slick with the first officer's blood, Lokhir led his new fleet out onto the open sea and a glorious future. Tales soon returned to Naggaroth of ports set ablaze, fleets scoured from the seas and who cities put to the sword. The High Elf port of Tor Canabrae, whose Dragonships had long been the terror of Naggarothi Corsairs, fell in a single night once Lokhir Fellheart set his attention to it. [2b]

He sailed along the Vampire Coast of Lustria, fighting off the dead on land and sea until he reached the site of the sunken city of Chupayotl where he anchored his fleet. Seven Sorceresses of the Dark Convent granted his warriors the ability to breathe underwater and he launched a raid on the ruins, fighting off aquatic Lizardmen, vast manta rays and squids. The survivors returned laden down with magical artefacts that would fetch a high price in Ghrond and boost his already formidable reputation. [1b]

Such deeds, and many more, earned Fellheart not only more glory than that of all his forebears combined, but also wealth beyond measure. Slaves and treasure flow into Karond Kar as never before, earning Fellheart the grudging respect, not not quite the loyalty, of the city's masters. The best plunder he keeps, but there is always plenty more for lavish rewards and bribes.[2b]

Fellheart is much admired by his Corsairs, not just for his generosity, but also because he fights at the forefront of every battle -- a dangerous habit many Dark Elf admirals lose as soon as they can. The burdens of command have done little to blunt Fellheart's swordplay, and he fights as naturally as he reads the oceanic temper, feinting towards one foe before changing direction mid-thrust to cut down another. Ever aware of his crew's loyalty will last one as long as his reputation, Fellheart strives to slay enemy heroes and add their severed heads to the growing collection festooned about his command deck. He knows full well that ever skull adds another tale to his legend and, more importantly, gives mutineers a compelling reason not to cross swords with him.[2b]