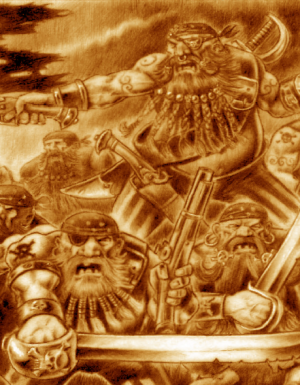 Long Drong's Slayer Pirates are a famous band of Dogs of War mercenaries, who's entire company is compose of the deadly and fearsome Dwarf Slayer Pirates of Captain Long Drong and his great ironclad ship the Fair Fregar. [1a]

Fifteen Dwarfs and a dead Dwarf's chest, yo ho ho and a flagon of ale. [1a]

Long Drong, as his name suggest was a rather tall Dwarf, who began his career as a Dwarf seafarer in the seaport of Barak Varr, where he worked his way from cabin boy all the way up to the rank of Captain of the a trading ship called he Barrel of Ale, a ship that was known to have brought the finest Dwarf ale to all corners of the Old World. [1a]

That was until one terrible voyage around the coast of Sartosa. A storm blew up, the worst storm seen for a hundred years, and the ship foundered on the treacherous rocks. Although the crew was washed up on the shore, the entire cargo of rare dwarf ale were lost. This disaster was something no self-respecting Dwarf could bear, and the great Dwarf Captain wouldn't wish to have survived the ordeal. Long Drong knew his career as a Dwarf trader was over. He resolved to become a Slayer of the Seven Seas and to seek a glorious end, worthy of a saga. His crew, who were just as ashamed by the loss has also sworn the slayer oath and together these Sea Slayer's sailed the oceans until a worthy death will restore their lost honor and erase their shame. [1a]

Having thus sworn, Long Drong, know known as Long Drong slayer, trekked inland to his destiny, which was to become the notorious pirate ever to lurk the Sartosa. His first act was to storm the stronghold of the dreaded pirate Capitano Sisicco and capture his ships and treasure stash. With the latter, Long Drong hired Dwarf craftsmen to rebuild the flimsy vessel into something a Dwarf could be proud of, not sparing the iron! He also hired Dwarf smiths to forge cannons for the vessel, which Long Drong named The Fair Fregar after a famous Dwarf maiden of Barak Varr, rumored to be extremely beautiful. A figurehead representing her was carved by the crew. Unfortunately, neither Long Drong nor any of his crew had ever seen a real life Dwarf maiden, so they had to rely on their imagination and hear say. The result, part of which were shod in brass, made an awesome battering ram for the ship. [1a]

The prisoners, now chained in Long Drong's dungeons, were freed after telling him all they knew about buried treasure and handing over any maps they had. Long Drong learned that the key to success was often the possession of a pay chest full of gold in which to hire mercenary army and to hold it together under their command. Many such pay chest had been lost in battles and there were mercenary generals willing to pay handsomely for their return, even double the value of anything inside the chest, or a great fortune in the empty chest alone. This was because recovery of lost treasure is mostly a matter of pride and honour among Mercenary Generals, who regard such chest in the same way as other races do their army standards. [1a]

So Long Drong let it be known that, being a seafaring Dwarf, he could seek out and rescue a lost pay chest wherever it may be in the known world and return it to it's rightful owner. All he asked was to keep any treasure that he might find in it, plus a reward in gold equal to as much as the chest would hold! By the standards of mercenary generals this was but a small price to pay for the restoration of honor and respect, and soon offer's to hire his services came flowing in by swift messengers. [1a]

Thus the Far Fregar voyaged to many distant lands, Araby, Lustria, Albion, and many uncharted islands, and brought back various pay chests which may or may not have been genuine. In doing so Long Drong raided the treasure hoards of many notorious pirates and corsairs and made countless enemies determined to get their revenge on him. A price was on his head, everyone sought to accomplish his doom. What more could a seafaring Slayer could ask for! His only friends turned out be those mercenary generals from whom he had restored his honor, and these soon began to hire Long Drong and his pirate crew to fight as a regiment in his armies. Their task, needless to say, was to seek out and capture the enemy pay chest on the battlefield. Only the reckless Dwarf Sea Slayers, seeking a heroic end would take on or succeed in such a task. As yet Long Drong has still not met his doom. [1a]

The Slayer Pirates may not be hired by Bretonnia, Chaos Dwarfs, High Elves, Orcs & Goblins and Wood Elves. [2a]

In 5th Edition, only Orcs & Goblins could not hire the slayers. [1a]