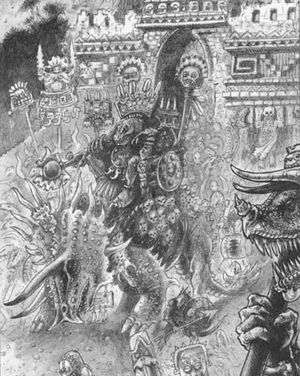 Lord Mazdamundi of the Enlightened Sphere, Sweetness of Life's Sorrow, Lordling Surveyor, and Master of the Gateways, is the oldest and most powerful living Slann and the ruler of Hexoatl. [3a]

A former pupil of Lord Kroak, he presides over the Lizardmen temple-city of Hexoatl, located at the northern tip of Lustria, the first bastion of defence against Dark Elven invasions from the north. Mazdamundi has successfully thwarted all attacks on the temple-city, including the first massive invasion following the coming of Chaos.

Like all Slann, Mazdamundi is a powerful wizard, able to bend the winds of magic to his whims. Being the oldest of the Second Generation, Mazdamundi's powers far outstrip even those of other Slann. Mazdamundi's focus is on geomancy, and he is easily the foremost practitioner of this rare and difficult lore today. On the battlefield, Mazdamundi's fearsome geomantic powers can destroy dozens of foes at once.[5b]

When called to battle, which is thankfully rare, Mazdamundi rides upon the back of a giant Stegadon named Zlaaq, a beast he controls through sheer force of will and who has served him for almost five hundred years. [5b]

He was but a tadpole swimming in the sacred pool when the Old Ones perished following the collapse of the polar warp gate. [3a]

In his youth he was instructed by Lord Kroak himself. [5b]

In the year -1500 of the Imperial Calendar, the Dwarf holds along the Worlds Edge Mountains were wracked by massive earthquakes, resulting in the decimation of the Dwarven empire, a blow that sent the Dwarven Empire into decline for thousands of years. Unknown to the Dwarfs, these earthquakes were caused by Mazdamundi, and are but one example of his unparalleled control of geomancy.

He and other Slann were awoken when the central warding arch of the ruined temple of Itzahotek began to fail, releasing the confined rift and bringing many Daemons into the world. He led the host of Hexoatl against them, with a vanguard of many snakes, Carnosaurs and Stegadons. Great Spells were enacted by both sides and the area devastated before the Daemons were finally defeated by Spectres summoned by Mazdamundi. A new protective archway was built, freezing the blue flaming pillars in place and eventually centuries later the jungle returned - but the beasts and plants within have an uncanny aspect. [2a]

Following increasingly brutal raids by the Dark Elves, Lord Mazdamundi leads armies into Naggaroth to recover artefacts before creating a new mountain to close off pursuit from Clar Karond.[4b]

When El Cadavo creates the port of Cadavo in Lustria in 1944 IC, Mazdamundi orders it destroyed on three occassions having been disturbed from his contemplations [5a], but each time it is rebuilt. Finally he devestates it with an earthquake and it is abandoned. [4a] However even since that great effort his blood was awoken and he could no longer return to the depths of his slumbering contemplation. [5a]

In 2520 IC, he dispatches Scar-Leader Kroq-Gar to Albion to cleanse the island of warm-bloods before altering the climate of the island to allow jungles to grow. Construction then begins on the city of Konquata. [4a]

He has four unique spells he can cast. [3a]