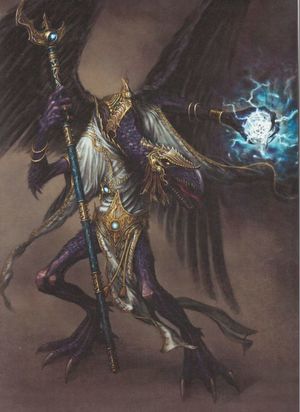 A Lord of Change}

Lords of Change are the Greater Daemons of Tzeentch. [5a]

They are also known by the names Chi'Khami'tzann Tsunoi, Eyes of Tzeentch, Feathered Lords and the Watching Lords of Change. [3a]

A Lord of Change has a wreckful but playful mind, uncaring of the consequences of its actions but deeply intelligent. They are winged and feathered with a carning neck , their feathers usually blue or yellow but they may shift colour or form as they will. Few mortals can endure the scrutiny of the Daemons gaze. [3a]

Only a very few of the Lords of Change are able to puzzle out the schemes of the mindmazes that lead to a secret chamber in the Impossible Fortress where they are granted the favour of their lord. [2a]

They manipulate hundreds of mortal destinies, often being part of the unending war between the four great powers of Chaos. They seldom venture into the the mortal world unless the storms of magic have unleashed vast amounts of energy that can sustain and protect them. [2a]

Lords of Change are among the most potent spellcasters in the Warhammer World. They are able to summon whirling storms of change and mutation, blast adversaries apart with bolts of pyrotechnic energy. The avian head of a Lord of Change sits on a craning neck. Its wings are a multi-colored splendor. Most Lords of Change are known to have some degree of foresight. As such it is easy for them to stay at least one step ahead of their enemies at all times making them skilled tactitians. Although usually appearing in Tzeentch's colors of blue or yellow, the daemons find it unimportant to maintain any consistent look and may appear in any form or color that suits them.

Of all the daemons and servants of Tzeentch, the Lords of Change most embody the nature of the god as the supreme manipulator, and are the foremost agents of the Changer of the Ways. In form they are avian, winged humanoids. Their most memorable feature are their heads, and most particularly their eyes. The scrutiny of its gaze is unbearable, for it holds all the wisdom of Tzeentch himself, along with his deep and subtle understanding of mortal fears. When a Lord of Change looks upon a mortal it sees not just its flesh and blood, but its hopes and dreams, along with their ultimate failure or realisation.