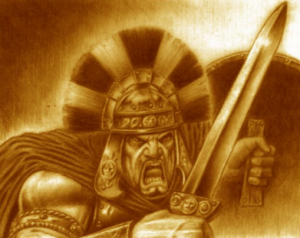 Lorenzo Lupo, Merchant Prince of Lucinni is the current ruler of the Tilean city-state of Luccini and a descendant of that city's ancient founders. [1a]

Lorenzo is very proud of his line of descent from his city's founders: Lucan and Luccina. As well as this he is quite an antiquarian and collector of art and antique artifacts. His palazzo on the old acropolis of Luccini is decorated with frescoes in the antique style and the gardens and colonnades display old statues found in the acropolis.[1a]

Lorenzo is a well built, muscular man, much like the colossal bronze statues depicting his ancestor lucan. He follows the ancient classical Tilean athletical pursuits as practiced in the days of his ancestors. This means that he regularly hurls the discus, wrestles or fights hand-to-hand against the strongest opponents, rows on the Tilean sea in the galley he races, trains with heavy bronze weights and runs in the Great Race in one end of his princedom to the other, as messengers did in the distant past. This means that he is very strong, tough and agile.[1a]

His prized possessions are heirlooms of his house, said to have been owned by the city's founders. Lorenzo wears armour of the old-fashioned style and fights on foot in the manner of his ancestors. This is a strange eccentricity of his and would be considered quaint and maybe even ridiculous by his rivals if he wasn't so good a general and didn't beat them so regularly, his prescence also inspires his troops, who not only benefit from his outstanding, but will be eager to protect their Prince in close combat. His reputation for bravery and fighting hand-to-hand in the front rank of his troops has earned him the respect and awe of his enemies.[1a]

Lorenzo is a deadly Mercenary General, renowned for his skill in close combat.