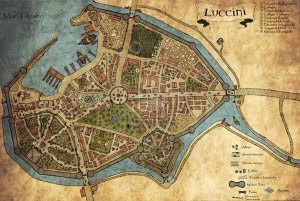 The City of Luccini.

The City of Luccini stands beside the Tilean Sea at the southern tip of Tilea, opposite the island of Sartosa.

Luccini is almost continuously at war with the pirates of Sartosa and has a very strong fleet of galleys. Luccini is in fact one of the strongest military powers in Tilea and many mercenary generals of repute have learned their trade there.

The city was named after Luccina who is regarded as a sort of patron goddess. Lucan is also venerated as a deity and there is a fine temple to the divine twins on the acropolis. The Princes of Luccini usually claim descent from these two legendary figures which means that there are two rival factions: those claiming descent from Lucan and those claiming Luccina as their ancestor. Not surprisingly, the principality has changed hands between these dynasties more times than anyone can remember, and not without blood being spilt as abundantly as wine in the notorious revels for which the city is famous!

The Princes of Luccini are noted for their often bizarre sense of humour, a family trait said to go back to their ancestors. If anyone claims to be Prince who seems to be rather dour or miserable he is soon assassinated or banished into exile by a more jovial contender. Indeed, an aspiring Prince often strengthens his claim before the citizens by assassinating or overthrowing his opponents in a particularly humorous manner. So it is said that "The Prince of Luccini is most dangerous when he is laughing!"

The city is very old and clustered around a high rock called the acropolis. Like the acropolis in Tobaro, this was the centre of an ancient Elven colony. There is a legend that Luccini was founded by the twins Lucan and Luccina who were king and queen of a pastoral tribe who settled around the ruin-strewn acropolis. On its summit they built their palace.

In 2379 IC, shipwrecked Corsairs from Karond Kar are shipwrecked near Sartosa and join the crews of several vessels to raid Luccini and Remas.[1a]

Currently, the famed Lorenzo Lupo is the ruling prince who claims to unite the bloodlines of Luccan and Luccina in his person and drove Leopoldo di Lucci, his rival and leader of Leopold's Leopard Company - the former temple guard - out of the city.

For a short period Golgfag's Mercenary Ogres were in service of Prince Lorenzo, but the prince imprisoned them, because they insulted and harmed almost any of the citizens of Luccini and created too much havoc in his principality. Later he send them as Mercenaries in the service of an exiled Imperial Noble to the Border Princes, hoping, they would never come back.