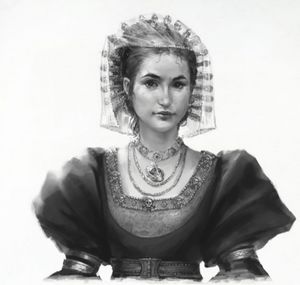 The surviving daughter of the Quixana family in the Duchy of Zaragoz, her father had married her to a Empire nobleman before a bloody coup by their rivals in the diAvila family. [1a]

Ten years later a Priest of Solkan avenged her family in her homeland and she aquired a holy book of the God of Laws and later became a great patron of puritanical art. [1a]