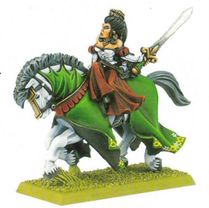 The most beautiful woman in all of Tilea, and some say even the whole of the Old World, is Lucrezzia Belladonna. She is also the most dangerous to know. Lucrezzia is a renowned sorceress and rumoured to be an arch poisoner, mistress of many assassins. [1a]

Lucrezzia's first husband, Luigi, Prince of Pavona, perished at the hands of paid assassins sent by rival Merchant Princes. Lucrezzia, then only a very young woman, was determined to keep her hold on the principality at all costs. Several mercenary generals who commanded armies in defence of her city became her husbands and therefore also Princes of Pavona. Every one met with a mysterious demise, usually when their political and strategic skill was found wanting! [1a]

Consider Borso, who lost the battle of Etobrutti and died soon afterwards when his wounds were mistakenly treated with poisonous herbs. The next day, mercenary captain Donato assumed command, won a great victory and saved the city from the Verezzians. Donato married Lucrezzia soon afterwards and became Prince of Pavona. A few years later Donato was about to make a disastrous alliance with Trantio against Borgio the Besieger, who was married to Lucrezzia's older sister Dolchellata at the time. However, before the army of Pavona was committed to this unwise course of action, Donato succumbed to a meal of poisonous toadstools which had been gathered in the woods by an ignorant kitchen servant unable to tell the difference between edible and venomous mushrooms. Lucrezzia was of course angry and distressed, but not so much as to prevent her subsequent marriage to the dashing captain Ranuccio, after an indecently short interval. He immediately rushed off ahead of the army of Pavona to attack the rear of the Trantine army just as it was deploying against Borgio and expecting reinforcements from Pavona! For this show of solidarity with an old ally, Pavona was richly rewarded by Borgio. [1a]

Lucrezzia's seventh husband, Poggio, recently made an abrupt exit from the political scene after drinking three bottles of very dubious quality wine. Lucrezzia is now casting her eye around for a new husband to share the government of Pavona and lead its armies to victory, with her by his side. Are you man enough for Lucrezzia Belladonna? Mercenary Princes with a delicate digestion should not apply! [1a]

It is said that Lucrezzia Belladonna is the most beautiful lady in the Old World. However, Bretonnian Knights consider this honour to rightfully belong to the Fay Enchantress of Bretonnia. When a Tilean noble once praised her beauty at a tournament in Bretonnia, he was immediately challenged to a joust by a rash Bretonnian Knight. The Lady Belladonna, who happened to be present, appointed the Tilean as her champion. When the Tilean, following local custom, asked Lucrezzia for her favour, she simply kissed his lance. [1a]

Unfortunately, the Tilean was unhorsed in the joust, though he did score a glancing blow on the Bretonnian which resulted in nothing more than a scratch. However, the Bretonnian quickly slumped over in the saddle and fell down dead. When the heralds asked whether the lance tip was poisoned, Lucrezzia said, "How could it be poisoned; I have kissed it and I don't feel unwell!" Since then no one has claimed to be more beautiful than Lucrezzia Belladonna. To cast doubts on her beauty is the kiss of death! [1a]

Lucrezia is rumoured to be an expert in the mixing of poisons and potions. Whether this is true or not, no one knows, or at least no one has lived long enough to tell the tale. Her enemies always seem to come to a bad end! [1a]

Although Lucrezzia is a Master Sorceress, she does not have magic items. Instead she has various Poisonous Items, reflecting her special skill as an arch poisoner! These items are not affected by anything that normally affects or negates magic items.[1a]