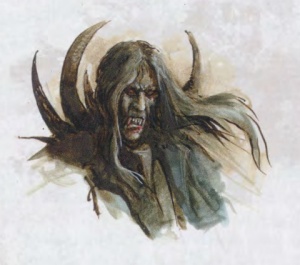 Arch Grand Commodore Luthor Harkon is a mad Vampire, and the ruler of the Vampire Coast of Lustria. [4a]

Lutr of the tribe Harkoni, was born in ancient times and was turned into a vampire by Abhorash, champion of Lahmia in Nehekhara. While serving in Lahmia he was master of the harbour guard and one of Abhorash's four primary assistants (along with his cousin Walak of the palace guard). After the fall of Lahmia he travelled with his Sire to Mourkain to serve under king Ushoran. It is unknown how he survived the fall of Mourkain and the Strygos empire.

Many years later in 876 IC he came to Lustria [1b] after the ship carrying his coffin was attacked and looted by Norse pirates. Sometime after their ship stranded on the Vampire coast, and the pirates had become Zombies bound into Harkon's service. [3a] Shortly after, he headed inland, finding a Lizardman temple in the ruined city Huatl. [4b]

Exploring the temple he uncovered a sealed vault. He ordered his zombie minions to break it open, but each time they did, a set of glowing glyphs drained the magic reanimating them and destroyed them. Enraged, he attacked the vault with dark magic, but the glyphs were designed to stop Chaos sorcerers more powerful than him, and retaliated: they attacked his mind, leaving him mentally unstable ever after. [4b]

Establishing himself as the Pirate King of the Vampire Coast Harkon gathered an army of zombies made of corpses of pirates and sailors from around the world which he reanimated [1b], as well as commanding a huge navy made up of their ships. [4b] His flagship fielded one of the most powerful cannons ever created - Queen Bess, a former Imperial Hellhammer Cannon. He became feared across the oceans of the world.

In 930 IC, Lord Xltep attempted to destroy the undead enclave and growing empire - his cohorts defeat Luthor's forces at the Battle of the Eclipse and drive them back from the interior. Luthor invokes a great enchantment in 1011 IC to draw in ships and their crews from across the Great Ocean, increasing his fleet and army over the next century and in 1127 begins to raid across the world. [1b]

It is not until 1351 IC that Luthor launches a new offensive into the interior but partially cloaked by stinking mist, his zombies attack and destroy the city of Axloti and Luthor gains many arcane artefacts. [1b]

In 1492 IC, many nations and races sent expeditions to Lustria after Marco Colombo‎‎ returned to the Old World in a ship laden down with gold. Luthor dispatched emissaries to many of these, offering his aid against the Lizardmen in the form of gilded Ebony Skulls which allow the user to call forth undead seamen. [1c]

An alliance with the Dark Elves in 2471 IC enabled him to raid the ruins of Chokablox but he is captured and imprisoned. [2a]

During the End Times, the newly resurrected Nagash started recruiting many of the world's most powerful undead lords to form his Mortarchs. Harkon joined mostly out of boredom and became the Mortarch of the Abyss. To this end he played a vital role in the invasion of Nehekhara, leading his armada up the River Mortis to fight the fabled navy of Zandri, one of the most powerful sea-going forces in the world. In a battle lasting days Harkon eventually defeated the Zandri navy, leading his forces up the river to join the invasion force of Mannfred von Carstein. Despite indulging in rather unnecessary looting of Nehekharan tombs along the way, the combined army fought its way through Nehekhara, eventually arriving at the epic battle of Khemri where the forces of Nagash destroyed the united forces of Settra the Imperishable.

After this Harkon became one of the less useful Mortarchs, but stayed loyal to Nagash unlike many of the others. He was sent along with Mannfred to confront the Nurgle possessed Isabella von Carstein and the Nameless and their horde of nurgle daemons which were invading Sylvannia. In a disastrous battle he and Mannfred were defeated when the Nameless seized control of their horde of zombies. They were forced to flee to a nearby inn called the Dead and Buried where they were joined by Vlad von Carstein and a small number of other powerful vampires.

Again the forces of Nurgle attacked and the vampires were slowly overwhelmed. During the battle Harkon slipped into one of his most deranged states and survived thanks only to the protection (and eventual sacrifice) of his subordinate Captain Drekla. Ultimately, seeing the battle was lost, Mannfred took his flying Nagadron and fled the battle. Harkon grasped onto the flank of the beast to escape also, but the ever traitorous Mannfred cut off the hand Harkon held on with, letting him fall into the sea of daemons and zombies below. Despite cutting down many of the foe, Harkon was eventually confronted by Isabella herself who had been warped and twisted by Nurgle to be an anathema to the undead. She brought her curse down on him and the Pirate King of the Vampire coast was consumed by rot and destroyed.

He has been severed from the Winds of Magic, now generating a unusual anti-magical field. [4b]

Zombie pirates had the ability to carry firearms all thanks to Luthor Harkon, for he stole Slann gold enabling the zombies to do so, but by doing this he was cursed by the gold, driving him insane. Luthor Harkon was the only vampire who did not use magic and could not change or manipulate anything. He had a brace of pistols, a cutlass, a magic resistance as a consequence of his magical accident. He had the power to regenerate on the last wound, was able to swim and had a split personality special rule. In a campaign on the US-Games-Workshop-Homepage he was revealed as a von Carstein Vampire whereas more recent material from the End Times books suggests his sire is Abhorash.