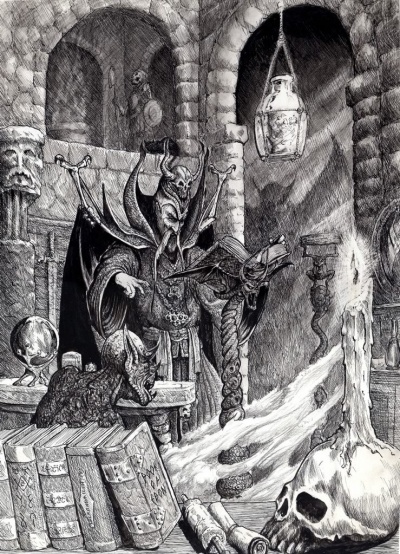 A wizard studying the secrets of magic.

Magic is a powerful but unpredictable force used by gifted individuals. The source of magic is the Realm of Chaos, from which the Winds of Magic flow into the Warhammer world.

During the Coming of Chaos, When it enters the material world, the Chaos energy refracts into eight "colours", collectively known as the Winds of Magic. A very small part of it concentrates and solidifies into warpstone, but most of it remains largely invisible. Wizards are individuals with the inborn ability to sense and to feel and, usually following special training, can learn to manipulate and use magic in the form of spells.

There are several kinds of magic but most wizards are able to use only a single form. Just as Chaos is represented as an eight pointed star, the winds of magic consist of eight colours or lores. Since magic is closely associated with Chaos, it carries with it an inherent risk to its users, and all wizards walk a narrow road between power and damnation.

Only the most magically-adept races, such as Elves and Slann, are capable of mastering all of the eight lores of Magic, and most races, including humans, dedicate themselves to learning only a single lore. Thus each of The Empire's Colleges of Magic are centred around the use of only one wind of magic.

The Winds of Magic

Each of the eight colours is represented by its own name and rune in the language of Chaos. The eight Winds (or Colours) of Magic, and their corresponding Colleges and Lores:

The lores of magic

The Lore of Light, derived from Hysh, the white wind of magic, represents the abstract of consciousness and illumination in the literal and metaphorical meaning of the word. It is a magic of philosophical truth and wisdom, rather than the more academic and fact-based wind of Chamon. The magisters of Hysh are called Hierophants, and are often seen in the role of philosophers and valued advisors. [1a]

On the battlefield, it uses many exorcism spells, so Hierophants are particularly effective against the forces of Chaos and the undead, their light even being able to banish daemons, and their illuminating magic able to cure Chaos-spawned insanity and fear of the hearts of the mighty champions of the Empire. It also protects troops from mortal harm.[1a]

Even for those with the sight, the White Wind is almost invisible, showing itself as a lightly glowing haze, but as it is often found in bright, sunlit places, it is difficult to spot. The wind’s fleeting nature also makes it difficult to manipulate. [1a]

It is said to have three domains: [1a]

The Lore of Metal is derived from Chamon, the yellow wind of magic, the densest of the colours of magic, and is attracted to heavy metals such as gold and lead. [1b] Spells involving Chamon frequently make use of these two metals; gold as a magical conductor, lead as a magical insulator. Compared to other magics, Chamon is rooted in the physical world, and it is relatively easy to get to grips with its basic concepts, although it has deeper complexities which make it difficult to truly master. It can manipulate metal, especially armour, turning it against its wearer so plates, rivets and chain all go molten, burning the wearer.

The Lore of Life is associated with Ghyran, the green wind of magic, which is closely tied to nature, water and the flow of the natural essence of life through the world. It is strongest near sources of water or in areas where life grows in abundance - around rivers and lakes, by springs, in forests and woods. Rainfall is known to unleash a torrent of Ghyran energy where it falls. The strength of Ghyran magic is generally affected by the seasons - it is most potent in spring and summer, and it declines during winter. Ghyran magic can be used in a wide range of spells - as well as giving vital energy and providing healing, it can be used to manipulate the natural environment and control water in all its forms.

The Lore of the Heavens is associated with Azyr, the blue wind of magic. The wind of Azyr is light and insubstantial, and after passing into the world from the Realm of Chaos it quickly dissipates into the upper portions of the heavens. [1d] Azyr is the Aethyr's metaphysical drive for inspiration and that which is out of reach. It is creativity and the desire to emote.

It is inherently paradoxical. Azyr gives shape to abstract concepts, seeks to find meaning within the unknowable, and provides narrative for that which has none. The Lore of Heavens is commonly associated with dreams, theory and divination. In battle, it manipulates the sky to harness destructive weather or draw upon the predictive powers of astrology to alter probabilities. It is by far the most balanced of all the common lores.

The Lore of Shadow, is associated with Ulgu, the grey wind of magic. Ulgu is a mysterious wind, which spreads disorientation and confusion amongst those it touches. It is spoken of as a thick grey fog, and it is drawn to still lowlands and waterways where natural mists gather at dawn. Ulgu invokes the sensation of being lost, or perplexed by something that you can't quite put your finger on.[1e] The Shifting Isles off the coast of Ulthuan are shrouded with the power of Ulgu, and provide an impenetrable maze to protect the isle from invaders. The lore of Shadow tricks the foe into thinking they have been hit by a giant pendulum/ been attacked by ghosts/slain by a mysterious floating sword. So convincing are these illusions, that the foe usually keels over and dies anyway. Only the swift-minded can see past these tricks. It is generally used to confuse and befuddle the foe and sap their will to fight.

The Lore of Death is associated with Shyish, the purple wind of magic. The power of Shyish comes from the ending of things, the slow decline of the soul, and the certainty and terrible awe of death that all sentient creatures must face at some point. Shyish tells us that even though physical form must inevitably come to an end, creation is permanent, and there exist forces larger than our mortal selves that deserve respect and even reverence. Shyish is drawn to places where death must be faced, or where things are brought to an end. It blows strongly around battlefields, lingers around gallows and courts of justice, and hangs in the mournful silence around fresh graves. [1f] It is said to be strongest around times of obvious transition, when one state ends and another begins. Dawn and dusk are the most obvious examples of this, but also spring and autumn, and the equinoxes that mark the beginning of the end for winter and summer. Death magic is used to attack solitary individuals, usually enemy leaders.

The Lore of Fire is embodied by Aqshy, the red wind of magic. Aqshy blows down from the north as a hot and searing wind. Temporal heat acts as a conduit for Aqshy, and so spells involving Aqshy almost always involve fire. It collects around open flames, volcanoes and dry deserts scorched by the sun. It is also attracted to wherever there is excitement and argument, courage and vehemence, since Aqshy is the Aethyric coalescence of passion in its widest possible sense. Aqshy is wielded by the order of Bright Wizards who have their power-base in the Bright Wizard College in Altdorf. The Lore of Fire is extremely destructive, compromising nearly exclusively of "magical artillery".[1g]

The Lore of Beasts is associated with Ghur, the brown wind of magic, which is the coalescence of bestial spirit, the predator and the prey. It flows around the wild, untamed places, where the touch of civilisation has not yet been felt. It is a savage wind, as unreasoning as it is devoid of malice. Amber wizards are often called 'shamans' and are rarely found in cities or other outposts of civilisation. The Amber Order is the only Order of wizards who do not have a building in Altdorf, but they are rumoured to occupy a series of caves in the Amber Hills to the west of the city. Only those foolhardy or most in need deliberately seek out the Amber Order. In battle,it augments troops to become stronger and tougher, turning mediocre troops into fearsome warriors.

These are lores of magic that are extremely rare or race specific.

(Dhar), represents the primal Chaotic source of magic. Spells cast using dark magic use multiple strands of magic in its raw, unrefined form. Dark Elves are the most renowned users of dark magic, but specialised forms of Dhar are used in the Necromancy of Necromancers and Vampires, first harnessed and honed by Nagash to raise the dead on a vast scale. It is known that by sacrificing "volunteers" it can increase the power behind the spells of Dark Magic.

(Qhaysh) Consists of the entire spectrum of magic, and when used is further refined into a more advanced form. High Magic, when "refracted" into the separate colours, are essentially specialised forms and seem to influence somewhat the magician in question. High Elf mages quickly grasp the main eight lores, but it takes decades, or even centuries, to master magic in its purest form in High Magic.

A corrupted form of Amethyst magic and provides a way for the Necromance to cheat death and obtain eternal life. It is used by Vampires as well as Necromancers. [2a]

Used extensively by the Dwarfs, mainly because of their paranoid nature. It carries less risks than common magic, but is not as potent. It is usually used in the form of Bound Spells and is wielded by Runesmiths and Runelords. It is also to a lesser degree used by High Elves, Dark Elves, Chaos and the Warrior Priests of the Empire.

Lore of the Great Maw

The Lore of the Great Maw is wielded by Ogre butchers. It is fairly easy to cast and quite powerful, but there is a large chance of magical backlash. It was a gift to the Ogres by The Great Maw.1

This magic is extremely unique in the fact it is harnessed by Orc and Goblin Shamans not from the winds of Magic, but from the power of a Waaagh! itself and the individuals within it. The magic channelled by Goblin Shamans and Orc Shamans, is very different however (Little Waaagh! and Big Waaagh! respectively). Orc magic mainly stomps on, punches, shoots at, and generally is rather violent towards the enemy. Goblin magic, however, is far sneakier, tricking and enfeebling the foe and making Orc and Goblin soldiers better, occasionally resorting to a few offensive damage spells.

The Bray-Shamans of the Beastmen can harness the Lore of the Wild. This seems similar in nature to the lore of Beasts, but Wild magic represents the cruel and sinister side of nature. It is used to turn mounts against their masters, summon mighty forest creatures and devolve the minds of men into simple beasts.

Ice Magic is a mysterious form of magic seemingly practised only by women in Kislev especially the Tzarinas. It has rarely been used outside of Kislev.

This encompasses all the magic derived from a deity. The blessings of the gods means that there are rarely miscasts and the magic is learned easily, but the spells are not particularly that powerful, and most of them have few battle applications. Instead they are meant to make life easier, increasing crop yields, making chores easier, etc. Notable exceptions are Nehekharan magic, the magic wielded by the Tomb Kings, and the "holy fire" wielded by Sigmarite priests.

Individuals who can harness the winds of magic to cast spells are commonly called "wizards" or "casters", but go by many other names: