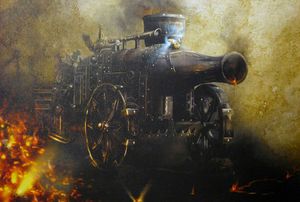 The Magma Cannon is a powerful war engine of the Chaos Dwarfs. [1a]

In appearance it is a cross between a piece of artillery and a furnace, able to cover enemies in fire and molten metal. The Daemonsmiths who design and build them are highly competative and whilst all are of a similar basic design they often reflect the creators own creativity with deadly liquids other than metal or lava held within enchanted glass shells. That smiths and their crew may die in experimental failures, such is expected of the priesthood of Hashut. [1a]

It was first created to deal with Trolls and other similar monsters that the Chaos Dwarfs fight. [1a]