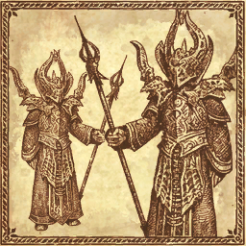 A powerful Magus of Tzeentch.

Magi of Tzeentch were a powerful form of Chaos Sorcerer who excelled in the summoning of the Raven God's foul Daemons.

A Magus of Tzeentch is a devoted follower of the Raven God, and has spent his entire lifetime studying pure sorcery with a fevered intensity. Desperate for even a bare glimpse of Tzeentchs great plan, the Magus has learned through his research that Tzeentchs daemonic minions are creations and reflection of the Great Changer, and he focuses his search for knowledge obsessively on this fact - for perhaps, by understanding the servant, he may better understand the master. While it is plainly impossible for a mortal mind to grasp even the smallest fragment of Tzeentchs thoughts without being shattered into gibbering insanity, it nonetheless amuses Tzeentch to allow his mortal followers to continue in their pursuits. To that end, a particularly powerful and devoted Magus may be gifted with the services of Tzeentchs daemons.

Even for the strongest of Tzeentchs followers, to call a daemon is no small task, for these chaos-spawned nightmares are often equally happy to devour either their summoner or his enemies. A Magus has just barely enough control to ensure that any daemon he calls forth will focus its unnatural attention on his foes instead of on himself, but even that slight leash is enough to serve his purposes- after all, ordering a daemon to rend and destroy is redundant, since the daemon will do so regardless.

The Magus can call forth several different types of daemonic fiends, but can only maintain the concentration needed to restrain a single one at a time. A clever Magus therefore makes sure to best fit his summoning to his need: a Pink Horror which flings bolts of fire corruption at distant enemies, a Blue Horror which spews out waves of warping energy around itself, or a Flamer which spits blasts of fire at groups of enemies.