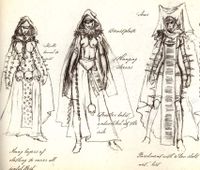 Members of the Order

The Maids of Sigmar is a female Order of Sigmar based just outside Altdorf in the Empire. [1a]

Their Reclusium is in the forest to the east of the city of Altdorf. [1a]

They only leave their stronghold once a year, subsisting on food they grow and offerings by the local villagers who hold them in high esteem. On mid-summers day they parade through the local settlements, led by their matriarch, singing the Dirge of Brutal Truth whilst the young initiates pick up the offerings that are thrown repsectively to them. [1a]