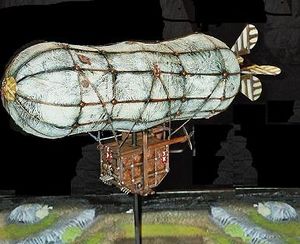 Malakai Makaisson was a master engineer of the dwarfen Engineer's Guild. He was the mastermind behind the creation of a Dwarven Iron Clad steam ship, named Unsinkable that tragically sank on its maiden voyage, taking most of it's crew members with it. After that, an Airship he invented named the Undestructible, exploded on its first flight, killing its courageous Dwarven crew. After this final disaster, Malakai was thrown out of the engineer's guild. Such was his dishonour that Malakai shaved his hair into a mohawk and took the Slayer Oath. Although now a Slayer, Malakai Makaisson didn't stop inventing, and in 2499 IC he created a new Airship.[1]

After an episode with Thanquol and Boneripper that tried to steal the new Airship, named the «Spirit of Grungni», Gotrek and Felix used the Zeppelin to make a voyage deep into the Chaos Wastes to evacuate the lost Dwarf hold of Karak Dum.[1] Coming back, they saved the young Ulrika Magdova in the steppes of Kislev from being kidnapped by Thanquol's Skaven. The Airship even survived a confrontation with a large Dragon before it went to Karak Kadrin for repair and refitting. While Gotrek, Felix and a bunch of other slayers killed the Dragon, the Airship came in just at the last moment to destroy an overwhelming horde of Orcs and Goblins with its bombing as well as a Bandit Army, that was out for the Dragon's Treasure.[2] Then he brought the surviving adventurers to the Kislevite city of Praag. There Malakai's Airship's bombing later helped to destroy a large Chaos Army that laid siege on the city.[3]

Later Malakai Makaisson constructed the Goblin-hewer, an axe-throwing machinery of destruction. With that new invention he became a Mercenary, that worked exclusively for Dwarfs, the Empire and Dogs of War Armies and would be part of the Slayer Cult Army during the Storm of Chaos. In the beginning of the Storm of Chaos he was also hired by the Imperial Gunnery School of Nuln to transport new cannons and mortars with his new Airship to the besieged City of Middenheim, but his Airship and fright never arrived there, because of an intrigue of a secret Chaos Sorcerer, who secretly had bound Daemons to the gunmetal of the weapons.[4]