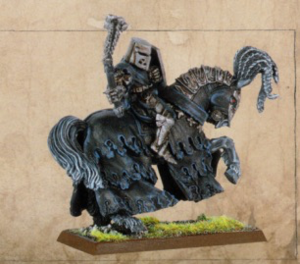 Duke Maldred of Mousillon was the last official Duke of Mousillon, responsible for starting a civil war over the False Grail.

The recent death of the King of Bretonnia had left the country without an heir, Jules the Just had fallen to a Chaos Knight on the beaches of northern Bretonnia, needless to say his opponent had also perished upon the kings lance.

Maldred, the Duke of Mousillon decided to regain his dukedom's glory by gaining the throne. Maldred was known as a brave knight and a shrewd commander, who was well fitted to defending the small but wealthy dukedom of Mousillon. With help from his sorcerous consort Malfleur, the treasonous Maldred set off on the Grail Quest and found the holy relic of The Lady after an incredibly short time. In reality the Grail was fake. Maldred and Malfleur compounded their treachery by kidnapping the Fay Enchantress. With the grail in his possession and no one to oppose him, it looked like Maldred would soon have the crown of Bretonnia in his grasp. Many knights who felt unfairly treated flocked to Mousillon's banner. As the Duke rode to Gisoreux to claim the crown, he was met by the army of the former King. Maldred held aloft the grail, asking who dared to stand against its bearer. Meanwhile, the Questing Knight known as Gaston de Beau Geste had rescued the Fay Enchantress from her prison.

Whilst the opposing army stood silent, the Green Knight emerged from the forest, and turned to challenge the Duke. At that moment, all saw the mysterious woman standing beside the former King, the true Grail in her hand. The fake was revealed for the tawdry thing it was, and Maldred’s followers deserted him en masse. The Duke fled back to his castle, but the King deprived him of both title and noble status. Since that time, there has been no Duke of Mousillon.