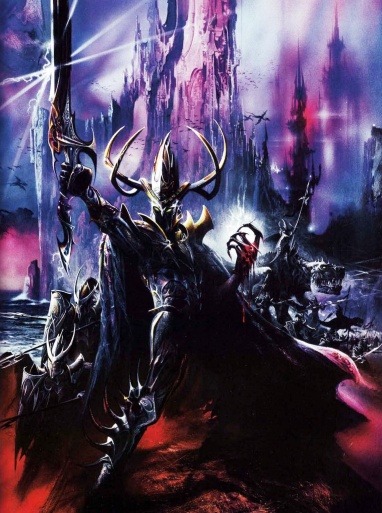 Malekith is the undisputed lord and master of the Dark Elves. Formerly praised and honoured as the Great, today he is cursed and feared as the Witch King.

Malekith is the son of the legendary Aenarion and his second wife Morathi. He was born and raised in Nagarythe, and many believe that his childhood traumatised him as his father's court was a bitter and savage place. Blood sports, hunting and duels were common in the dangerous court of the Phoenix King with many of the finest warriors gathered there to fight the Daemons that plagued the lands. His mother taught him diplomacy, staecraft and sorcery and his father the arts of war and how to lead and command warriors in battle. [6a]

After the death of his father, the High Elf princes gathered to choose their new Phoenix King. Malekith, who was Aenarion's son, an experienced warrior, a mighty wizard and a successful general, was the obvious choice.[4a][5a][6a]

However, it was then revealed that Aenarion's children by his first wife, who had been believed slain by Warrior of Chaos, were in fact alive. Yvraine would become the new Everqueen. This created a huge problem for Malekith's ambitions as the Everqueen (his own half-sister) and the future Phoenix King would have to conceive a daughter. The Council of Princes believed Malekith was too much like his father (he was short-tempered and preferred to resolve disputes with violence); they also feared the influence Morathi wielded over her son, as she had wielded it over Aenarion, and wished to restrict it.

Believing that such a war-like ruler was unsuitable to rule in a time of peace, the council elected Bel Shanaar, Prince of Tiranoc instead. On the surface, Malekith took the decision well;[6a] he even silenced the public outcry from his mother and his homeland. Instead, he declared that he would strike out on his own, winning glories and wealth for all of Ulthuan. At the least, he would make the Elven Empire greater and more powerful than it had ever been; at best, he would prove his worth as the future Phoenix King, in any age, beyond all doubt.

Malekith travelled far and wide in search of greater power and glory, establishing colonies across the Old World in the lands that would become the Empire and Bretonnia, fighting great battles against Orcs and Goblins, Beastmen and the followers of Choas, as well as establishing friendship and trade links between the High Elves and the Dwarfs being appointed ambassador to the High King of the Dwarfs, Snorri Whitebeard. Snorri and Malekith became close friends, with the Elf Prince peldging undying support and exchanging priceless gifts when they met for the last time. [6a][7a]

He even led expeditions into the Chaos Wastes itself and it was here that he discovered an ancient city in the ice and within it a powerful artefact - the Circlet of Iron. [6a]

After many centuries away from home, Malekith eventually returned to Ulthuan, only to find his homeland on the brink of civil war. The Cult of Pleasure, a dark sect devoted to the Cytharai, the darker Elven gods had begun to take hold of Ulthan's society. Malekith volunteered to lead investigations into the cult's activities, and many elves lost their lives in the great purges Malekith led (many of whom were his political enemies). In truth, Malekith was in league with the Cult; Morathi was the cult's high priestess, and was using it to destabilise Ulthuan and raise an army for the next stage of his plan.

After many years of plotting, Malekith made his move; he murdered Bel Shanaar in secret, claimed the Phoenix King had been part of the Cult of Pleasure and had committed suicide in shame. Malekith called the ruling Princes to the Shrine of Asuryan and demanded the crown pass to him, but they were skeptical. Realising they would not give it willingly, Malekith tried to take the crown by force; he and his followers slaughtered most of the princes in the temple. However, as he tried to walk through the Eternal Flame as his father had done, it began to consume him and he was terribly burned. His followers fled back to Anlec with their master's body, where Morathi nursed him back to health. [4a][6a]

Then began a long civil war, known as

With the aid of sorcerers and a renegade priest of Vaul he forged a mighty suit of armour to protect his withered and burnt body with the Circlet of Iron mounted on its helm, he then fused the uncanny metal to his own body. He would now become known as the Witch King as he renewed his war against the new Pheonix King, Caledor I but his finest army was defeated in the marshes of Maledor. Finally he attempted to call upon the gods of Chaos for aid which would result in the destruction of much of northern Ulthuan by a vast tidal wave. [4a]

In the end he and his followers were driven out of Ulthuan, after Urathion's betrayal, making their way to the cold wastes of Naggaroth on the newly created Black Arks. There they settled and erected their black cities, including the capital Naggarond. The Dark Elves have, to this day, continued to fight, determined to see Malekith restored to what he sees as his rightful throne and the High Elves exterminated or enslaved for their perfidy.[4a] For over 5000 years, he has waged war against the High Elves, seeking to reclaim the throne he considers his own. [4b]

During the war before the Sundering, Malekith rode into battle either on the Black Chariot pulled by a pair of Cold Ones [4b] or the black dragon Sulekh until she was killed at the battle of Maledor.[1a]

Until just before the End Times, Malekith drove a chariot pulled by a pair of Cold Ones into battle. During that time he ordered all other battle chariots in Naggaroth to be destroyed, so that he owned the only remaining one.

During the wars of conquest and the Sundering, Malekith wielded the sword Avanuir.[1b][3] Later he wielded the sword Urithain the Destroyer.[2b] During the battle for the Blighted Isle, Urithain was shattered by Tyrion wielding Sunfang.[2c] The shards of Urithain were reforged by Hotek and renamed Asuryath.[2d] Malekith wielded Asuryath in the battle for the Isle of the Dead where Asuryath too was shattered by Tyrion wielding the Sword of Khaine.[2e]