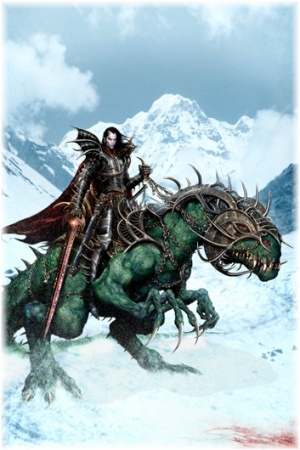 You may be searching for the novels: Malus Darkblade (novel series).

Malus Darkblade is a ruthless hero of the Dark Elves. Despite all the challenges he faces he managed to climb the social ladder of Dark Elf society becoming the ruler of Hag Graef.

Malus' father, Lurhan the Vaulkhar of Hag Graef stole the sorceress Eldrie, sister of Beanth Bale, and althought he was ordered by Malekith to turn her over to him he kept her for his own benefit. Part of the pact he made with her was to produce a child, Malus. His mother believes he is destined for greatness and has set events in motion and influences events and charactes in order to fulfil her ambitions for Malus. His father only fulfilled the bare minimum of the obligation he had to Malus's mother and thus left Malus without the vast resources and power his siblings possessed.

After Malus tried to enrich his fortunes - which ended in disaster - he in desperation stole an enchanted skull from one of his half-brothers Urial at the behest of his sorceress half-sister Nagaira, with whom he had a hot-cold relationship and went north to the Chaos Wastes where the skull would open a temple where a great power awaited to be claimed. However, Malus's soul was instead claimed by the daemon Tz'arkan, the 'great power' which was bound in the temple by five great sorcerors during the age of strife. The daemon offered Malus the chance to reclaim his soul if he could find five artefacts which would free the daemon from its prison. He had only a year or the daemon would have owned his soul. On occasions he could draw on the daemon's power but doing so increased its influence on himself. [1a]

He slew enemies and allies alike on his long quest, including a mighty Dragon Ogre, Orcs, Minotaurs and even his own father to gain the Dagger of Torxus but despite all the odds, Malus succeeded and returned to the temple where the daemon was imprisoned. Enacting the rite, he freed the daemon. Anticipating trickery, Malus fought the daemon, but during the fight his soul was stolen by the daemon. Turned into a soulless killer, with the warpsword of Khaine the only surviving artefact from the rite, Malus wandered the Chaos Waste unkillable until he discovered the location of the daemon and reclaimed his soul. In the process though, the daemon was sealed again in Malus's body. [1a]

Now Malus rules the city of Hag Graef and is the personal champion of Malekith.

Malus trusted steed is Spite a Cold One.