It's a classic out of production tabletop game by Games Workshop from 1993. It is to Warhammer Fantasy what Battlefleet Gothic is to Warhammer 40'000, it lets you fight epic battles at sea in the world of Warhammer, taking your campaigns to the next level.

It Includes extra leaflet, how to paint man o' war, great condition, with a page of sail designs for you to cut out or copy and use. 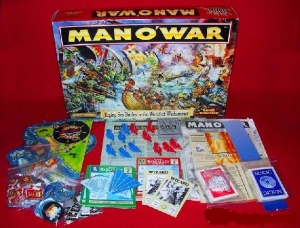 The Man o' War Box and anything in it
Retrieved from "https://whfb.lexicanum.com/mediawiki/index.php?title=Man_o%27_War&oldid=105594"
Category: