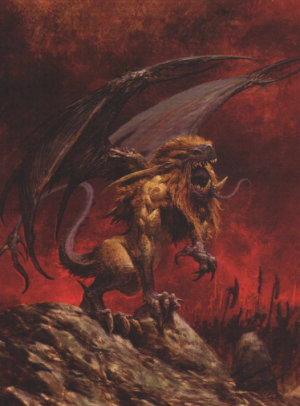 Manticores are huge, leonine beasts that soar on leathery wings. [3a]

They are amongst the most powerful of all the predators that live in the north’s mountain ranges. The mutating power of Chaos ensures that no two Manticores are truly alike. Some have manes of writhing serpents, others pelts of iron scales, and many sprout spiked tails with a poison strong enough to boil a man’s blood in his veins. However, all Manticores are berserk killers saturated with primal fury. They are so fierce that they are held by the Dark Elves to be incarnations of Khaine, God of Murder.[1][2]

Manticores tolerate no intruder into their territory and will attack be they humans, a Great Eagle, Griffon or even a Emperor Dragon. [4a]

The Manticore often appears on shields and banners across the Old World. [4a]

There are rumours that certain Elves practice the breeding of Manticores amidst the black obsidian peaks of the mountain ranges that dominate the Land of Chill, far to the west of the Old World. How they manage to tame such vicious creatures is unknown, though many stories indicate that the Elves of that land are every bit as fierce as the Manticore they raise. Scholars that ask too many questions about such matters tend to find few answers or a messy death.[1][2]

Shades are the favoured hunters of such beasts, but even so many Dark Elves die in the expeditions to capture them. They can not be fully broken, but enough to allow a rider to mount them. Even so, they will sometimes ignore the rider and plunge them both into a unexpected battles. [3a]