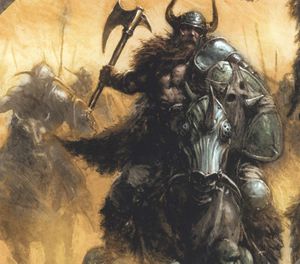 Marauder Horsemen are the Chaos Warriors' light cavalry, who ride ahead of the main body of army and get behind the enemy battle lines. Though too weak to win the battle on their own, their offer invaluable support, attacking war machines, scouts and keeping clear of the main regiments until the glorious assault by the mainstay warriors bears fruit and the enemy flees. That is when the Marauders strike out, mercilessly cutting down all of them.

This tainted cavalry is equipped up to task, wielding great flails or spears & shields to ensure that their charge will smite the weakling enemy. Alternatively, they might take throwing axes, harassing the enemy of the Dark Gods and bringing them closer to fleeing as the back ranks start to fall with axes embedded in their backs.