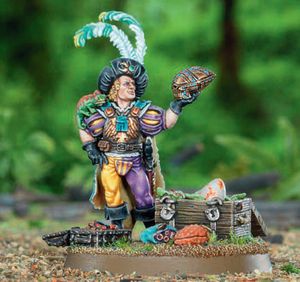 Marco Colombo was a merchant-prince, Mercenary General and explorer from Remas in Tilea. [1a] [2a]

Marco travelled to Araby and fought in several naval battles on its coast and around the port of Sartosa earning a good reputation as a mercenary captain. [2a] He acquired a map of Lustria from a drunken Norse adventuerer and began planning a expedition to that land. [3a]

In 1492 IC he discovered the land of Lustria (although the Norse had already been there) with three ships and returned with a ship laden with gold. [1a][3a]

They had reached Lustria after some one hundred and forty-four days at sea, landing far to the south of Skeggi and luckily well north of the Vampire Coast. They also managed to avoid High Elf trade routes and so conflict with the elves, norse longships and pirates. [3a]

Prior to departing, Marco had purchased Skaven captives and these he staked out on the beach with treasures he had obtained form across the Old World. He then ordered the cannons fired each hour to attract the local Lizardmen. Finally a large group of skinks arrived and inspected the offering, which they were surprised and pleased to recieve, leaving a large offering of food in return. Marco ventured inland and met with a Slann, Lord Zltoc, with one of the skinks able to speak Bretonnian. Marco offered his services in war against the enemies of the Lizardmen, hoping to obtain gold and gems although the Lizardmen were not at first receptive to the idea. However several days later he was summoned to meet Lord Xtli who wished answers to several questions. [3a]

They travelled to Tlax where Marco was able to show Xtli his maps and confirmed that Sotek had not appeared in their lands - both of which pleased the Mage-Priest. When asked about how Warm-bloods spawn, Marco resorted to much gesticulation and noting that intoxicating beverages, music and darkness was important - much as Dwarfs so asked had said to Lord Zetec. [3a]

Trade talks continued with the High Skinks of the city, who offered spice, grubs, potions and the tusks of many great reptiles and when asked - pearls that were so commonplace with freshwater clams being a ubiquitous snack. The Lizardmen were pleased that they could be bought with worthless beads! Whilst final negotiations were taking place, the city was attacked by Dark Elves and Marco was able to witness the Lizardmen at war. He in turn was able to pursue and capture the Dark Elf vessel, killing all on board - they were rewarded by even more pearls and spices. [3a]

However, many of the men now wanted to return home, whereas Marco wanted to stay and fight for the Lizardmen and gain yet more riches. Overnight, they secretly took two of his three ships and set sail for home. Still Marco and his remaining ship were able to recover artefacts from three raiding norse longships and received enough treasure to match that the deserters had stolen. He also received word that the deserters had been captured and sacrificed by the Lizardmen of Pahuax after raiding their lands. The treasures they had taken were returned to Marco and as the winds were changing, he took the opportunity to sail home. [3a]

Following his return, he took over the army of and later became the Prince of Trantio, fighting against several other cities. [2a]

He began a second expedition to the continent hoping to open a southern trade route, although other nations and races also sought to do the same. [1a] One of these expeditions made contact with the Norse colony of Skeggi. [2a]