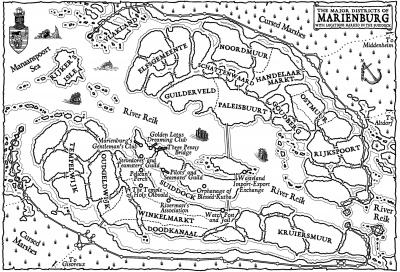 Marienburg is a wealthy trading city, and capital of the Wasteland, which was a western province of the Empire until its secession in 2429 IC. It is renowned for its flourishing sea trade and the flamboyant dress of its merchants.

Marienburg re-gained its independence though a massive transfer of gold into the imperial coffers during the reign of Emperor Dieter IV. All subsequent attempts to subdue Marienburg and bring it back within rule of the Empire have failed, and today Marienburg remains a fiercely independent city where the Count of Nordland, the nominal ruler of Marienburg, is forbidden to return under pain of death.

Marienburg has long been the largest and most prosperous trading city in the Old World. Many call it the City of Gold which alone conveys a good idea of the wealth of this sprawling cosmopolitan city. Nowhere else can be found the vast array of shops selling goods from as far away as the Elven kingdoms of Ulthuan in the west and distant Cathay in the east. The city’s craftsmen represent every skill known to man, and a few others beside, so that it is said in Marienburg there is no activity that cannot be quickly turned to profit.

Many mercantile guilds have their headquarters in Marienburg, most important of all the secretive High Order of Honorable Freetraders which represents the elite amongst mercantile society. This large, rich and ambitious body of men feel themselves shackled by the old order and are eager to seize power for themselves.

When the great port city of Marienburg lay within the Empire's borders, it was part of the province of Westerland, at the mouth of the River Reik. Upon declaring independence, the region is now referred to as the Wasteland, yet those within the Empire who would seek 'reunification' retain the use of the previous term.

(notes: This Timeline is based on Warhammer Fantasy Roleplay and as such there have been a few changes, most notably that Sea Elves are now considered High Elf traders. Also note that the abbreviation IC= Imperial Calendar)

In the late winter of 2525 IC, the Sea Elf fleet of the city sailed out alone to deal with an approaching fleet of Chaos and Norse warships. The same night and in their wake, the Meesterhand also set sail, hoping to loot the destroyed Norse vessels but finding instead the wreckage of the Elf vessels and a vast fleet of Plague Hulks and Longships making directly for Marienburg. [2a]

The Vloedmuur is breached by strange growths of foul vegatation and the fleet led by the Greenwolf sailed into the harbour despite the ferocious barrage from the fortifcations, gun batteries and the human ships in the harbour which had formed a wall around their flagship, the mighty Zegepraal. Yet the Greenwolf sailed on and through and with its consorts unleashed plague catapults upon those who stood against them. The harbour was swiftly taken allowing hordes of marauders to pour out into the streets. [2b]

Enraged by the attack on his home, the count Mundvard and his vampires countered by raising a army of the dead and attacking the invaders even as the city burned. [2c] The count summoned a terrorgheist who he first unleashed upon the Greenwolf which it destroyed [1d] before moving to engage the leaders of the host, the Glottkin as a magical duel was being fought between them and the vampire lord. However as it approached, a magical blast turned the monster into dust and shortly after Mundvard was himself cut down, his body flung into the Reik and the undead army he had commaded, collapsing. The remnants of the city would soon fall completely. [2d]

Marieburg fields a large army, mainly made up of well paid mercenarys, often clad in sumptous uniforms favouring blue, red and yellow. [4a]