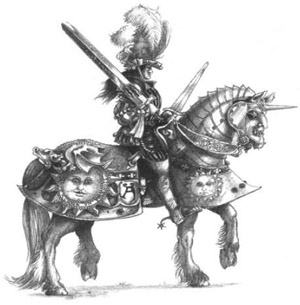 The late Marius Leitdorf was the latest Elector Count of Averland [1][2][3a].

Marked by an eccentric behaviour the count was dismissed as a madman by his peers and enemies alike. A formidable warrior nonetheless, he was recently slain by the Orc Warlord Vorgaz Ironjaw.[3b][4a][5]

Suffering from extreme mood swings, Marius Leitdorf could become irrationally furious only to be followed by deep depressions which could last for several weeks. During his normal phases he was an extraordinary artist, engineer and inventor. He was also a very skilled warrior fighting with his Runefang and a long-bladed dagger.[2]

For unknown reasons the count visited Bretonnia. During this visit he insulted the ugly wife of the Duke of Parravon. This led to a Bretonnian invasion in 2512, which thankfully floundered before the defences of Helmgart [4b]

The last straw was Leitdorf's suppression of the Halfling rebellion. Karl Franz decided to send Ludwig Schwarzhelm, his personal champion, to find a way to deal with Leitdorf. Surprisingly, the plan worked and Leitdorf appointed new advisers with instructions to curb the worst of his excesses [4a]

Facing a new Orc invasion, Leitdorf asked again for military support and he was not disappointed, as Karl Franz arrived in person with an army. The ensuing battle was hard-fought. The powerful Orc Warlord Vorgaz Ironjaw defeated and killed the count, who was nonetheless able to wound the Orc. The battle was then decided through a duel between Karl Franz and Vorgaz in which the Emperor prevailed[4a].

The lack of a clear successor has led Averland into a time of political unrest. The position of Elector Count of Averland is currently disputed [4c]