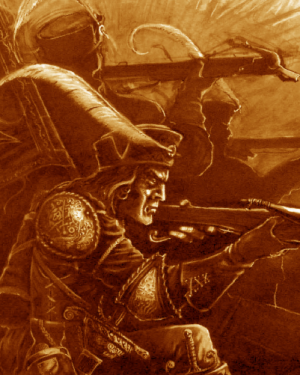 The Marksmen of Miragliano are a famous band of Dogs of War mercenaries whose origin hails from the Tilean city-state of Miragliano.

Although the use of the crossbow as a weapon of war is far from uncommon in Tilea, very few mercenary companies can hope to match the accuracy and precision of these marksmen.[1a]

We hit the right spot every time. [1a]

Captain Maximilian Damark, who is a veteran marksman with dozens of years of experience, currently leads the company.[1a]

The crossbow has always been the favoured weapon in Tilea because its long range allows troops to shoot from high positions on the ramparts and across moats and ditches into the enemy hordes. Crossbow bolts are powerful enough to pierce armour and inflict mortal wounds on tough and determined opponents. The crossbow is also handy for use in confined spaces, like ramparts, towers, gateways, and the narrow streets of most Tilean cities and on board Tilean ships. It is therefore no surprise that the Tileans never really bothered with the use of ordinary bows.[1a]

One of the most famous regiments to use the crossbow is known simply, and appropriately, as the Marksmen. The Marksmen have operated for at least a hundred years or even more, having served under different captains as time passed. There is no clear knowledge about who exactly created this elite force, but it is agreed that should a captain fall, the most senior surviving Marksman would take over, and the regiment would continue their glorious history.[1a]

The regiment recruits its soldiers from Miragliano, and returns to it every now and then to replenish its ranks and renew family ties. A recruit must prove himself as an able marksman by shooting a bolt through the head of the Prince of Gold Ducat, which is placed in the center of a target set at an incredible range of 300 paces. Once accepted, recruits perfect their marksmanship through constant practice. Their success is such that Miragliano has far fewer pigeons than any other Tilean city. The Marksmen of Miragliano gained distinction and rich Imperial rewards in several battles. As well as serving the Empire, the regiment has served the Tsarina of Kislev and several Dwarf Lords. On other occasions, the Marksmen have fought with the High Elves and have taken part in many journeys overseas.[1a]

The Marksmen can be hired by any army except Bretonnia or Skaven. [2a]

The Marksmen are generally veteran mercenary soldiers who wear a variety of clothing, armour, and equipment obtained from all four corners of the world. Many Marksmen wear badges on their caps or hats, consisting of a tall feather, which represents the crossbow bolt's swift flight, and the pierced gold ducat, the very coin the soldiers had to shoot from 300 paces as a test of marksmanship to be considered for entry.