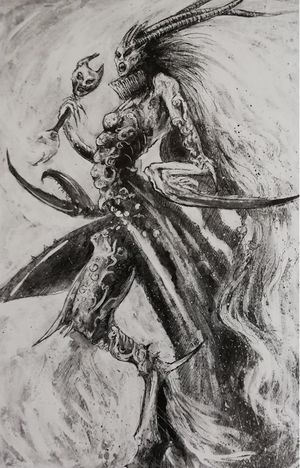 The Masque of Slaanesh, known also as the Eternal Dancer, Accursed Maiden, and Darkling Deceiver is a daemon of Slaanesh. [2a]

She was once the most favoured of all the Daemonettes, but now she has been cursed by the Dark Prince for a perceived slight. [2a]

Whilst many dances are from the past, she is able to also dance events yet to come such as the burning of Nurgle's garden or the final battle of the gods - the Rhan'k'adanra. [2a]

Following a great defeat by the forces of Nurgle and Khorne, the Masque attempted to ease the mind of Slaanesh with her dazling display of dance but instead the angry god saw only mockery in her performance. Further enraged he cursed her to never cease dancing and every dance would recall and celebrate one of his victories.[2a]

Since then, the Masque has danced across the mortal world and Realm of Chaos alike, never able to rest. She is attracted to places of sensory excess and draws those present into the unholy pagent - mortals and Daemons alike playing flawlessly playing their parts in the dance. Those that survive the performance awake to find death and destruction around them, filled with the agony and weariness of a body pushed beyond its limits. The Masque herself will have departed to her next event. [2a]

As she dances, her golden mask flickers and shifts to match the characters she is portraying. [2a]