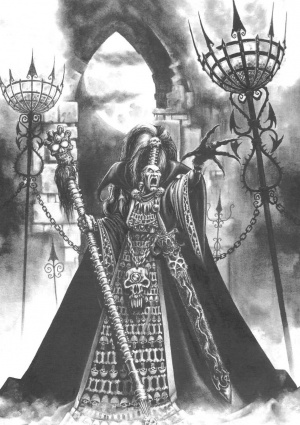 Most necromancers are haunted and hunted men and women, who often end up as a snack for a vampire, a animated corpse for their master or as raw ingredients in a horrific ritual. Those that survive and grow in knowledge and skill are often caught between the mortal world and the spirit world, driven insane and twisted in form by their use of dark magic. [3a]

Often they are armed with a Dagger or a simple Hand Weapon but some carry Halberds or similar Double-handed Weapons. Master Necromancers may ride to battle upon undead monsters, Nightmares [1b], Winged Nightmares or even a Zombie Dragon. [2b] Some take to the battlefield upon Corpse Carts. [3b]