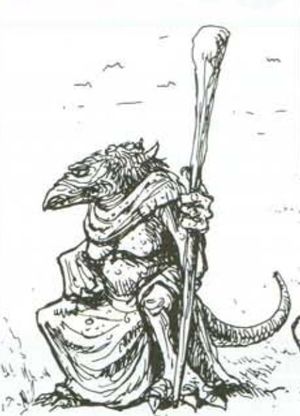 The Meargh or Witch-hags are the only female Fimir and it is they who rule the clans. Each is a extremely powerful spellcasters and only one reigning queen will ever be present in a stronghold. Should another female be born to a captive, the Meargh may decide to bring her up as a daughter but in time the younger female must leave to create her own clan, usually accompanied by a small contingent from her former home. [1a]

If a clan loses its Meargh, her clan will disperse with the warriors going on a death-quest to find a new queen or die. [1a]

The are often a master of many kinds of magic able to cast Battle Magic, Daemonic, Illusion and Necromantic spells. [1a]