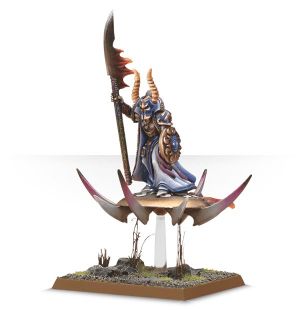 Melekh the Changer was a mighty Chaos Champion of Tzeentch and one of Archaon's Lieutenants.[1a]

Once a humble blacksmith of the Aesling tribe, Melekh was set on the path to damnation when the village shaman lost control of a spell intended to help Melekh's wife Kayla give birth safely, killing the woman and ensuring that Melekh's son was born a deformed mutant. The boy was deemed a good omen by the village chieftain, who named him Cyspeth and proclaimed him a sign of favor from their daemonic patron Zarechgor.

The village celebrated Cyspeth's birth, when the chieftain announced Zarchgor had spoken to him, decreeing the village was to hold a tourney; the mightiest warrior in the village was to become the new apprentice to the village shaman, Gaerkkol. This privately filled Gaerkkol with horror, for he had knowledge of the Prophecy of Fate, which foretold the coming of Archaon. When Melekh won the tourney, Gaerkkol sent him on what he believed would be an impossible task: to find the True Name of Zarechgor.

Unable or unwilling to back down, Melekh left for the Chaos Wastes, eventually finding a portal into the Realm of Chaos itself. There, he was beset by daemons of Tzeentch, but by mastering his fear, he forced them to submit to his will, enslaving an army of gibbering Horrors, flickering Flamers and rapacious Screamers to protect him as he sought out Zarechgor, Lord of Change. Riding atop a burning Disc of Tzeentch forged from the aether by his own will, Melekh quested on, destroying daemons of all four gods as he sought out Zarechgor.

When the Lord of Change finally stepped forth, he scattered Melekh's army with a gesture. When Melekh demanded Zarechgor share his True Name, the greater daemon struck him down with blasts of spellflame. Even as he lay dying, though, Melekh continued his questioning - and, for a moment, Zarechgor allowed the question to fill his mind, his thoughts becoming corporeal around him. Melekh's horrors chanted the name in chorus, and with his last breath, Melekh spoke the daemon's Name.

This bound Zarechgor to Melekh's soul, healing his wounds and bestowing him with the daemon's arcane knowledge and power. Gifting his new master with an enchanted blade, Zarechgor opened a portal and sent Melekh and his daemonic minions back to the real world. There, he found twenty years had passed, and his army of daemons was forced to do battle against his former tribe under the watching eyes of Archaon. At the height of the battle, Cyspeth murdered his teacher Gaerkkol, and thus the prophecy was fulfilled: Melekh become Archaon's lieutenant, Aeslings and daemons alike swearing their allegiance to him.