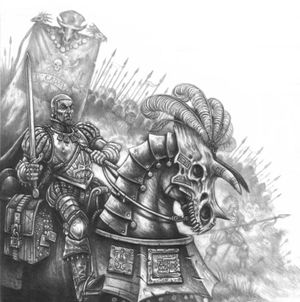 The Mercenary General is a bold adventurer and hard-bitten campaigner. He fights for money, for conquest and for the love of battle. This gallant figure leads the Dogs of War in pursuit of victory and plunder.[2a]

The majority of Mercenary Generals are golden armoured Tileans, hailing from the land's war-torn city-states, others hail from the Empire and Estalia as soldiers of fortune and seekers of glory. Most are grizzled veterans, with many scars to prove their worth and in order to command such a force, they are invariably powerful individuals, feared and respected with a reputation across the Old World. [2a]

Dwarf Mercenaries often unite behind a veteran Warlord or freebooter with a reputation for securing a good deal. [3a] Ogre mercenary commanders are usually brutal and savage with a proven ability to find captives, loot and food with failures being eaten by their followers. [3b]

Samurai Lords and their retinue embarked on fleets of War Junks are sometimes dispersed by Typhoons and blown to foreign shores - once they arrive, they will often march to the nearest authority and pledge allegiance in exchange for food and shelter. Other lords deliberately leave Nippon and seek adventure in other lands. [3d] Successful Orc mercenary leaders tend to be unsually intelligent but still able to intimidate. [3e]

Norse Warlords often set sail in their longships in search of adventure and plunder and some are happy to be bought off or even employed as mercenaries. [3f]