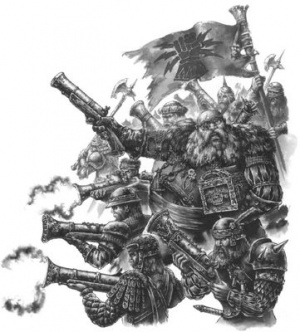 A Paymaster and his bodyguard.

The Paymaster is perhaps as important as the army's General, as he is responsible for all the cash which mercenaries are frightfully keen on. [2a]

He guards this with is life – literally so because he carries the army's pay chest with him at all times. The pay chest is a heavy, iron-bound, secure-looking affair that the Paymaster brings to battle on a cart. This is pulled by a sturdy, non-excitable beast, such as a donkey, mule or compliant Tilean grandmother.[1a]

So that the troops can see exactly where the Paymaster is at all times, something they find reassuring, the cart is provided with a suitably impressive flag that also serves as the army's standard.[1a]

It is said that the first mercenary general to bring a pay chest into battle was Justintine of Varenna whose city walls had been destroyed by an earthquake and was in dangers from being attacked by Orcs & Goblins. He and the entire population took their considerable treasure and looked to find a city elsewhere but were constantly pursued by the greenskins led by Warlord Ugwarg. Justintine sent word that he would share out the treasure amongst any that came to their aid and it drew out warriors from across the country. [1b]

Justinian and his new army made a stand on the coast, with many heros making their name including Hurcio - a giant of a man wearing a lion skin and wielding a club. So great was the slaughter that Tilea was free of the greenskins for the next ten years and the gold was indeed shared out between the surviving warriors. [1b]