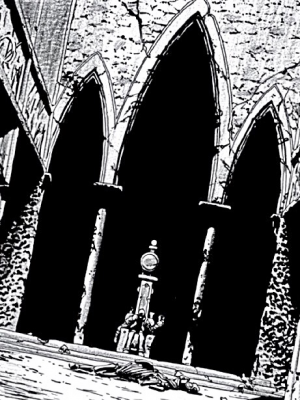 Merovech within his lost tomb.

Duke Merovech of Mousillon, also known as Merovech the Mad and Merovech the Butcher, was the bloody-handed ruler of Mousillon. A fearsome warrior and strong ruler, his desperation to restore the glory of his dukedom would lead him to become an extremely powerful Blood Knight, feared throughout Bretonnia for his bloodlust.

The Saviour of Bretonnia

Around 1813 IC, the Red Pox swepted through the fair lands of Bretonnia, killing many of its inhabitants. In that time, Merovech was Duke of Mousillon and a proud warrior looking with envy upon the glory days of Mousillon, during the reign of Landuin, first Duke of Mousillon. He was desperate to restore the prestige that his city had in those distant times. With honourable intentions but led astray by corrupt advisors, Merovech set upon the path of dark powers.

Thus it came that when the plague struck, the Duke and his knights remained unnaffected. Seeing his chance for glory, Merovech mustered his men and rode out against the vile ratmen who beset the lands of Bretonnia.

Believing he was Landuin reborn, he followed the same route as Gilles le Breton and his Grail Companions had taken, and headed east to Athel Loren. He relieved Quenelles from a siege. At the edge of the enchanted forest, he met with the armies of Parravon. He rode south and broke the sieges of Brionne and Quennelles with the Duke of Parravon and the Wood Elves of Athel Loren. [2a]

Although a great victory was won, the other knights looked with disdain and loathing to Merovech and his knights, who indulged in the most cruel bloodbath of the enemy and acted not at all chivalrous. All were invited to celebrate the victory over the Skaven with a great banquet in the Halls of Mousillon Castle. [2a]

However, the guest were most horrified by what they saw. Dinner was served by shambling servants and spitted and impaled criminals were set around the hall. Merovech, drunk and feeling ill-appreciated, claimed to be dishonoured. The king expressed his revulsion at what he saw, upon which Merovech accused the king of jealousy and conspiring against the saviour of Bretonnia, a thing the king should have done. Hereupon, the king challenged Merovech and was not to be deterred to let one of his dukes battle the duel.

The duel started. Metovech tore out the king's throat and, filling a goblet with it, drank the king's blood. Shocked, the other dukes hastily left Mousillon. Despite his reputation, Merovech was chosen to succeed the king he had killed and the Fay Enchantress officially denounced him as supreme ruler of Bretonnia. But his reign wouldn't last long, as Lyonesse already mustered its troops and invaded Mousillon, coinciding with a rebellion of the knights in Mousillon who took up arms against their insane ruler. Merovech slew many, but was eventually defeated, upon which the land of Lyonesse claimed a large portion Mousillon. [2a]

Though widely vilified, many notable knights and families owed Merovech for saving them from the Skaven armies. After his death they banded together and in spite of the new King's wishes, built a mighty tomb for the dead Duke. This huge stone mausoleum, the size of a small keep, was constructed near the centre of Mousillon. After many centuries his tomb sunk into the marshes of Mousillon and was thought lost forever. Many a Questing Knight set out to find the tomb, but none ever succeeded.

Merovech would return centuries later, rising from his tomb, he was revealed to have been a powerful vampire. The dark Duke was now gathered a large army of the undead, seeking to reclaim what he saw as his right. Merovech overthrew the Varghulf leader of Mousillon, known as the "Old One", taking control of his undead followers. A mighty army was starting to take shape, but Merovech needed to search for a champion, infiltrating tournaments under the guise of a noble Knight of the Realm. Merovech discovered two young brothers Calard and Bertelis of Garamont, he would go on to fight Bertelis and whilst he defeated his opponent with ease, he was greatly impressed with the young knights potential.

Merovech would bide his time, visiting Bertelis after a series of tragic events had resulted in his brother denouncing him. The morose and bitter young knight would accept the vampires offer to train him, eventually accepting the Blood Kiss. His champion chosen, Merovech decided to seal their bond with damnation, the two Blood Knights travelled to Castle Garamont, where the pair slaughtered an entire garrison of Knights and Men-at-Arms, drinking the blood of the slain and burning Garamont to the ground. Merovech would then call forth corrupt nobles to turn into fresh vampires, he would resurrect his long dead bodyguard of elite Blood Knights and amass an army of the undead, powerful enough to conquer Bretonnia.

Two years into the Vampires plan, Calard of Garamont now a Questing Knight, would arrive in mousillon disguised as a rogue knight intending to serve the evil Duke. Calards attempt to kill Merovech, would not go as planned, instead he discovered his brother Bertelis, slaughtering knights in a dueling ring, watched by his new master. As the two brothers fought, ghouls burst into the castle, led by the Old One, Calards infiltration had allowed the few remaining followers to release the Varghulf and attack the castle. Merovech would enter into a mighty duel with the Vampiric beast, eventually managing to defeat his enemy.

As Merovech looked down he watched as Bertelis was destroyed, despite defeating Calard in combat, the sudden arrival of the Ghouls had distracted him, allowing Calard to pierce his heart with the Sword of Garamont. Before retreating from the castle as the final Ghouls were slaughtered. Despite the loss of his greatest warrior, Merovech would not be set back, he would continue to amass his army and replenish his losses.

The Duke of Mousillon would last be seen at the head of his vast army. Slaughtering all in his path, Merovech was on the cusp of victory, fighting amongst his troops in the final battle to destroy Bretonnia. The vampire watched as Louen Leoncoeur King of Bretonnia, killed all around him as his army closed in. The kings mount, pierced by a spear, fell dead, crushing King Louen beneath its bulk. Merovech approached the trapped king and readied his twin blades for a killing blow, a blow that would never land. Calard had succeeded in his quest for the Grail, riding atop a mighty war horse and wielding a blazing lance, he had rushed into the battle at the head of a Wood Elf army.

Slaughtering his way through the Vampire's Seneschal bodyguard, he engaged the Duke in a brief but brutal duel, despite the Duke's superhuman speed and strength he was ultimately defeated, mouthing a curse as his body turned to ash. Merovech, Duke, Kingslayer and Vampire Lord was finally destroyed.