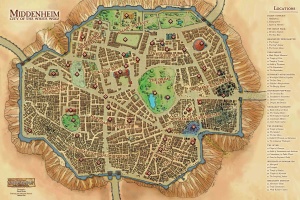 A map of Middenheim.

Middenheim is both the capital city of the Imperial province of Middenland, and an independent city-state.

Commonly known as the City of the White Wolf, Middenheim is a great fortress-city, second only in size and influence to the Empire's capital of Altdorf. The northernmost city of the Empire, it is built as a bastion against the north and the ever present threats harboured by the Drakwald Forest. The city stands upon a sheer pinnacle of rock, five hundred feet high, and is reachable only by four highways that run along colossal viaducts. Middenheim may seem invulnerable, but the rock it stands upon is riddled with ancient tunnels, Dwarfen and otherwise, that are home to things best not thought about too closely.

According to legend, the city was founded by the god Ulric himself to be the centre of his religion in the Old World. Originally the rock Middenheim is now built upon was the base of a tall mountain sacred to Ulric's brother Taal. Taal gave Ulric the mountain, who struck the top of the mountain off with his fist, leaving a flat top a mile across where the city was to be. For this reason the rock is called the Fauschlag ("fist strike").[1a]

A half century before the Empire was established by Sigmar, Artur, chief of the Teutogen tribe, discovered the rock. As the Teutogens were not renowned as great builders, Artur "enlisted" the aid of Dwarfs forced from their ancient home in the Middle Mountains to tunnel up through the rock and build a fortress. [1b] Artur is gifted with the Dragon Sword of Caledfwlch by a Shaman in -47 IC, defeating the Liche-Thing Babrakkos with it in -42 IC, but when it returns again he creates the role Warrior Eternal to reward the leader of the White Wolf riders who destroy it. He is crowned king in -17 IC. [3a]

A century passed before the work was complete. In that time, Artur had fought and lost to Sigmar in single combat, but by the 60th year of the Empire the fortress was complete and became the home of the Teutogens.[1b]

In 63 IC, Wulcan, the son of Artur and High Priest of the Cult of Ulric was granted a vision by Ulric which inspired him to consecrate a temple to Ulric. The massive temple took 50 years to complete, but Wulcan lived to see it finished. Trade grows between the town and the other human settlements, whilst wizards are encouraged to settle within Middenheim and who magically strengthen the defences. The Wizard and Alchemists Guild is created with the High Wizard and her deputies being paid by the city.[1b]

As the Cult of Sigmar grows in power, conflict erupts between it and the High Priest of Ulric, Graf Wulfgaeng puts pressure on the Emperor to grant the city provincial status and this finally granted in 555 IC. At the same time, the position of Knight Eternal is created. Although the Black Plague devestates the Empire in 1111 IC, Middenheim largely avoided the devastating outbreak, due to the strict isolationism ordered by Graf Gunthar, the city's ruler at the time. The city was sealed for 6 months until the plague had run its course. His actions saved the city, but hundreds still died from starvation.

As the Black Plague continued to devestate the empire, Middenheim become one of the few remaining bastions of Imperial civilisation in a land overrun by Skaven. The city was under siege by the rat men and the situation appeared hopeless. However, Count Mandred, called Skavenslayer coordinated an amazing defence of both the city and the tunnels beneath it. The months passed, and the Skaven horde eventually ran out of food, forcing them to withdraw.

In 1122 Mandred rallied enough of the nobility to proclaim a crusade against the Skaven. In a series of great battles the Skaven were driven back below ground. The Empire was saved, and Mandred Skavenslayer was crowned Emperor. Mandred rebuilt the shattered infrastructure of his nation during the glorious twenty-five years of his rule; tragically, though, he died from the poison of an assassin, the last act of spite from the broken and bitter ratmen. Graf Erich annexes Middenland in 1152 IC. [1b]

A war breaks out between the city and Talabheim and Middenland breaks away in 1550 IC whilst in 1812 IC the Middenlanders under Grand Duke Karl-Heinz lay siege to Middenheim for nine months. They are repulsed with Dwarf aid, gaining them special status in the city and the Undercity is sealed as well as substantial new fortifications being constructed. The Wizards War touches the city in 1979 with many necromancers and daemonologists being executed. Magnus the Pious visits in 2302 IC, humiliating the High Priest of Ulric who had attempted to brand him a heretic, Magnus walks through the Fire of Ulric and many join him on his crusade against Chaos.[1b]

During the Storm of Chaos, Middenheim was besieged by the dread Chaos lord Archaon, Everchosen of the Dark Gods. Luckily, the renowned Valten, rumoured to be the reincarnation of the imperial god Sigmar, was present to do battle alongside the defenders and hopefully defeat Archaon. Unfortunately, Valten was mortally wounded and despite Archaon's defeat by the Orc warlord Grimgor Ironhide and later retreat, he died. Since the events of the war, Middenheim has been rebuilding, and it remains to be seen how the city will be affected in the future.

Middenheim is currently ruled by Boris Todbringer, Elector Count of Middenland, a descendant of Gunthar von Bildhofen, brother of Magnus the Pious.[1b]

Graf Boris himself sought to become Emperor, but accepted the ascension of Karl Franz and is now one of his most loyal supporters.

Boris is protected by the Knights Panther, a secular order of knights dedicated to the eradication of mutants. The knights, together with their associated sergeants and men-at-arms, are a key part of Middenheim's army. In addition there is the formidable force of the Templars of the White Wolf, sworn servants of Ulric and reporting directly to Ar-Ulric.[1e]

The Teutogen Guard are Knights of the White Wolf who fight on foot. They are hand picked by Ar-Ulric as a personal bodyguard annually based on merit and not rank. It is one of the greatest honours a knight can receive. The city always houses a contingent of the Kislevite Gryphon Legion – these are 'loaned' by the Tzarina in exchange for a unit of Knights Panther. Middenheim is a cosmopolitan place, with a sizeable population of Dwarfs, many Halflings and even a few High Elves.

Unusually the Wizards of the city are well integrated with the military and are even on occasion to be found accompanying the City Watch, both the High Wizard and his deputy receive a stipend from the city for their ongoing contribution to its defences. [1e] According to the edict of 1555 IC all humans between 16 and 50 must own a longbow, sword or crossbow and train for 2 hours a week with their local serjant-at-arms. A force of mercenaries are also quartered in barracks around the city. [1e]

The Warriors of Ulric are no more than militia; they have no formal training like the free companies, but as Ulric commands they have trained themselves for battle. Hunt Masters drive vicious Hunting Hounds into battle, usually used for sniffing out Beastmen lairs their bite is worse than their bark. The so called Wolf Kin are similar to sigmarite flagellants, however Ulrics stern values and stoic nature means that devotees of Ulric are not possessed of such a mentality, but retain their clothing, weapons and armour, band together and seek vengeance on the forces that raid the Empire.

The Graf rules the city within the context of a semi-democratic government developed by his forebears. Technically, he enacts all laws within the city, but he has many advisers, and interested parties (merchants, artisans, religious leaders, and others) can make recommendations to him through the numerous established public commissions (one for nearly every aspect of city life), or even directly in some cases.

Because of the ever present threat of mutants and Skaven, all drains leading into the sewer system are required to be locked. Chaos is not tolerated in The City of the White Wolf and mutants are commonly executed upon revelation of their taint. Some parents abandon their obviously tainted offspring into the nearby Drakwald Forest, swelling the numbers of Beastmen present there.

The Cult of Ulric

Middenheim is the home of the Cult of Ulric and many priests can muster and lead troops not normally found within an Imperial army (as can be expected from the god of battle, wolves and winter). The city is also home to the High Priest Ar Ulric (son of Ulric), head of the cult for the whole Empire and like the Graf of the city a Provincial Elector. In Middenheim the worship of Ulric overshadows that of Sigmar [1c]

With the city's size prescribed by geography, burial space is at a premium and only the very wealthy can afford the price of a plot of land in Morrspark, the city's only burial ground. Those who can afford it can also be interred in the catacombs under the city's Chapel of Morr. The less wealthy usually cremate their dead, or bury them outside the city in the shadow of the Fauschlag. Paupers are simply stuffed in a sack and tossed off the Cliff of Sighs into the forests far below.