Middenland is located in the north (left). 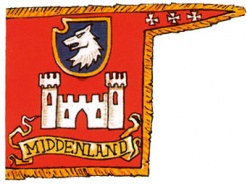 The banner of Middenland.

The Grand Duchy of Middenland[1a][2] is a large northern province of The Empire, being the homeland of the ancient Teutogens[3][4]. The colors of Middenland are blue and white[5a][6a]

The province is largely covered by the dark Drakwald Forest, a natural hideouts for bandits, mutants, Forest Goblins and beastmen, who pose a constant threat to travellers and vulnerable villages and towns.

The banner of Middenland is red and displays a castle, representing Middenheim, and a white wolf's head. Most soldiers wear blue and white.[2][5d][6a] Colored ribbons are worn by Middenlanders to differentiate between regiments.[5a] Some also carry wolf's tooth amulets to battle.[2] Wearing a wolf pelt to battle is a distinguishing mark- they can only be worn by those who have slain a wolf.[10]

Middenlanders claim descent from the firece Teutogen tribe who, before the time of Sigmar had carved out a kingdom near the Howling Hills, driving the Jutones into the marshes of the Wasteland. [1a]

Sigmar found them a honourable people but with an unbending will who would not submit to him until he killed Artur in single combat. [1a]

Following the Great Plague of 1111 IC, the Province of Drakwald was given to Middenheim by Emperor Mandred. [1a]