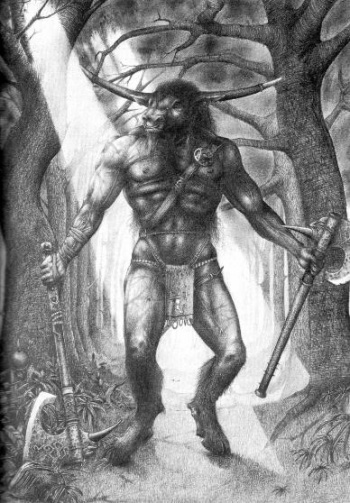 Minotaurs are a stronger and much larger variety of Beastmen. [2a]

While not being noted for their intelligence they are renowned for their toughness and strength in battle. This is due, in part, to the frenzied state that Minotaurs enter during conflict known as bloodgreed. This drives them into violent excess at the scent of blood.[4a]

Most Minotaurs live in the depths of the forest, lairing where even Beastmen fear to enter. Some move in warbands led by a Minotaur Champion, raiding and hunting as well as fighting other warbands. They also draw other monsters such as Giants and Trolls to join them. [3a]

Minotaurs are ruled by their own elders known as Doombulls who are the largest and most intelligent of their kind. Doombulls are revered as champions of the Chaos Gods and are often known to gain their favour. Minotaurs live mostly in forests all over the Warhammer World in their own tribes just as other Beastmen do. They are said to keep shrines to the Chaos Gods deep within the forests of the world where they stockpile captured treasures from defeated foes.[4a]

Minotaurs seldom speak, invariably using the Dark Tongue when they do so, communicating with their own kind by gesture and with expressions whilst in battle they bellow and roar. [3a]