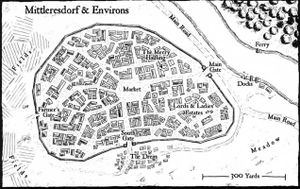 Mittleresdorf is a small town in the southwestern corner of Wissenland in the Empire. [1a]

It lies several days travel upriver from Wissenburg. [1a]

The settlement was created to provide a safe place for local farmers to live and also to draw new people to the area sand has been successful in both regards with both humans and a number of Dwarfs moving to the area. [1a]

A single elected Councillor, usually one of the merchant class. he co-ordinates the payment of taxes to ensure that the city walls and streets are maintained and the watchmen paid. [1a]

The majority of the population are farmers and their families, but there a number of merchants and traders. [1a]