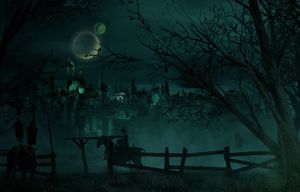 Approaching the City of the Damned

The ruined city of Mordheim is located on the border of Ostermark and Stirland.

The first settlement that bore the name Mordheim in this location was a fortress-monastery founded by knights of the Raven Order around the year 1000 IC as a tribute to Count Gotthard Angelos their fallen leader. The settlement grew slowly, trading in wool and fish but its people maintaining their skill in axe, bow and spear which served them well against frequent incursions by Orcs . [8a]

As a fledgling river town, it was one of a very few settlements of Ostermark that survived the brutal invasion by the infamous Orc Warlord Gorbad Ironclaw although the warriors it sent against the orcs were wiped out at the Battle of Valen Field. The Orcs turned west towards Averheim, which saved the town. [8a]

As the Empire tore itself after 1979 IC, Mordheim grew and prospered with Count Amadeus Steinhardt even locking himself in his palace enjoying lavish parties whilst the empire was plagued by war and pestilence. The gap between rich and poor grew ever wider with cults growing more numerous and stronger in both. [8a] The Count remained neutral as the three claimants for the throne of the Empire fought, gaining bribes and gifts from each whilst maintaining his own army in their clean uniforms. [9b]

Whe the Count ordered the removal of the statue of Count Gotthard, storied hero and founder of the city, it provoked riots and both the Raven Barracks and the West Gatehouse were attacked. Amadeus was not concerned and even watched it from his balcony within the strong walls of his palace. In response the nobles and merchants raised a powerful force of mercenaries to brutally secure the Rich Quarter and later the rest of the city. [9b]

By the year 1999 IC, it had gathered enough wealth and power through its extensive trade with the Empire and the Dwarfs that it was considered by many the seconds city of the Empire after Altdorf having many monuments, fine high- -domed buildings and a grand library. [8a]

The city was destroyed at the stroke of midnight that marked the beginning of the Imperial year 2000 by a twin tailed comet that had been believed to herald the second coming of Sigmar. Thousands had flocked to the city to witness the miracle of Sigmar's return, only to see the comet crash into the city and kill most of the people.[2a] Only the Sisters of Sigmar, praying within the Rock were spared the destruction of the great comet. [8a]

Shortly after the devastation it was discovered that the ruins of Mordheim were saturated with Wyrdstone shards from the shattered comet. Soon it was discovered that using Wyrdstone men could perform miracles: healing the sick, resurrecting the dead, and turning base metals to gold. This last use caught the interest of the rival claimants for the Imperial throne and soon the value of Wyrdstone far outstripped its weight in gold.[2a]

Mordheim was finally burned to the ground at the orders of the Grand Theogonist and remains in ruins to the present day.

Since the destuction of the city by the comet, the ruins are explored and fought over by various factions - human and otherwise.

At its height the city was a powerful centre of trade, river ships bringing fleeces and timber from the east and rare goods coming from Altdorf. It also benefited from the large amounts of fish in the river Stir and had a large, bustling market for fish. The city also traded extensively with dwarfs of the Worlds Edge Mountains. [8a]