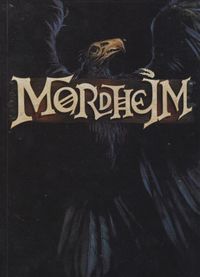 The cover of the Mordheim rulebook

Mordheim is a small scale skirmish game released in 1999.

Set in the period immediately after the cataclysmic destruction of Mordheim by a wyrdstone comet on the first day of the Imperial year 2000 during the Time of Three Emperors. The game revolved around the warbands set on plundering the recently destroyed city of Mordheim, the former capital of the province of Ostermark in The Empire the principal human realm in the Old World in order to further their patron's ambitions.

Mordheim was destroyed at the stroke of midnight that marked the beginning of the year 2000 by a twin tailed comet that had been believed to herald the second coming of Sigmar. Thousands had flocked to the city to witness the miracle of Sigmar's return, instead the comet crashed into the city utterly and destroyed it killing almost everyone in the city.

Shortly after the devastation it was discovered that the ruins of Mordheim were rich with wyrdstone shards from the shattered comet soon it was discovered that using wyrdstone men could perform miracles: healing the sick, resurrecting the dead and turning base metals to gold. This last use caught the interest of the rival claimants for the Imperial throne and soon the value of wyrdstone far outstripped its weight in gold.

The game was set at a time carefully chosen in the Old World's history. Shortly before the invasion of Vlad von Carstein when the count sent lesser Vampires to pursue his goal, sorcery had not yet been sanctioned (as this happened some 300 years later when Magnus the Pious ended the Time of the Three Emperors) and when blackpowder weapons were rare and unreliable.

Mordheim is similar to WHFB 3rd/4th editions in its basic rules with more focus placed on individual warriors.

Rather than single games Mordheim was geared toward ongoing campaigns with experience gathering for statistic increases and skill gains and included an income system by which a player amassed the means to buy weapons, equipment and more warband members.

The smaller scale of Mordheim allowed for greater variations between weapons than seen in the WHFB rules.

After release GW briefly included a section in White Dwarf Magazine called Town Cryer for new Mordheim rules before releasing it as a separate magazine with the same name.