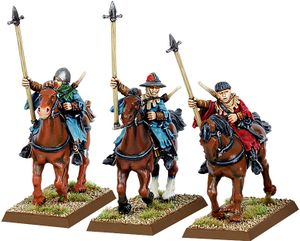 A trio of Mounted Yeomen.[1]

Mounted Yeomen are among the elite peasant warriors of Bretonnia, acting as both leaders of Men-at-Arms companies and also as a branch of mounted light cavalry. Many knights are dismissive of their achievements, arguing that the term "elite peasant warrior" is nothing more than a oxymoron. However, whilst it is true that the nobility are far better equipped, the Yeomen are almost as skilled as a Knight Errant, and they take justified pride in their martial abilities. Indeed, the overwhelming majority of Yeomen are dedicated professionals because it is their dedication that has distinguished themselves from the mass of Men-at-Arms around them. Unlike Foot Squires who act as elite infantry and retainers, Yeomen receive mounts and are used for scouting missions that are unsuited to knights. These missions are full of risk and very little glory.[1]

As they hold such privileged positions as head gaolers and militia Sergeants, to become a yeoman is among the highest ranks to which a peasant can aspire. It takes many years of dedicated service for a man-at-arms to be promoted into a Yeoman, and even then only an act of bravery on the battlefield will guarantee his ascension. Though no peasant may ride a Bretonnian Warhorse into battle, favored Yeomen are permitted to ride to battle on draught horses. Such troops will often scout ahead of the main army and keep the knights informed of enemy movements — a dangerous task, and one which earns no honour, so it is a task that the nobility believe is best performed by peasants.[1]

Having accumulated some wealth on privileged positions, they are far less inclined to run away, though the presence of their masters still helps. However, the nobles still don't care enough about their fate to be concerned if they do flee.[1]