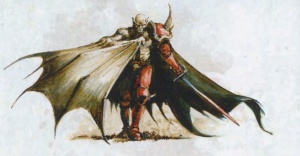 Mundvard the Cruel, known as the Master of Shadows was a Vampire Lord who ruled the criminal underworld of Marienburg.

Mundvard was a Necrarch member of the Von Carsteins. He left them however during Mannfred's aborted attack on the city. For over four centuries Mundvard ruled the seedy underbelly of Marienburg with an iron fist despite none knowing truly who or what he was. Powerful magics, his proclivity for multiple identities and the brutal, public executions of those who displeased him allowed him to build power and influence year by year. In this way he earned his title Master of Shadows.

Mundvard's rule however was brought to an abrupt end in 2525. When the Glottkin invaded Marienburg as part of the End Times the city's human garrisons were unable to repel them. Mundvard, his vampires and retainers were forced to cast aside all pretense and secrecy, raising a long prepared undead force [1c] to try to repel the Nurgle forces destroying the city. Despite a fierce battle, they failed with Mundvard himself being cut down and flung into the Reik. [1d] He managed to get to shore and taking a horse he rode to Altdorf. [1e]

Forced to report this failure to Vlad von Carstein, Mundvard then accompanied the von Carstein patriarch to Altdorf to once again confront the forces of the plague god. At Altdorf the vampire lord once again battled the Glottkin, seeking revenge for the loss of his beloved port city. His necomantic power infused his pet terrorghiest the Suiddock Beast and it nearly overcame the trio. At the last moment however the sorcerer Ethrac Glott managed to cast a spell that destroyed Mundvard entirely.2

The model above has never officially been named as Mundvard, but it's similarity to the artwork justify it's inclusion here.