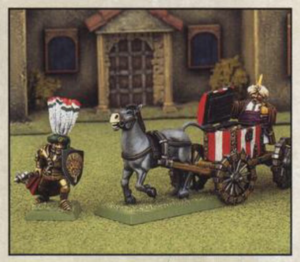 Mydas the Mean and his Money Lender.

Mydas the Mean is a Tilean, Mercenary Paymaster, known for his foul attitude.[1a]

The most notorious Paymaster ever to come out of Tilea is Mydas the Mean. His origins are obscure. Some say he was a sheikh of Araby who embezzled a fortune from the sultan and had to flee. Whatever his origin, he first rose to prominence in Sartosa. Here he was put in charge of guarding the treasure staff of Dwarf Pirate Gridi Scumbeard. The renowned Dwarf leader quickly began to appreciate and admire Mydas's incredible meanness and reluctance to part with gold, even to the extent of refusing to tell the Dwarf where his own stash was. Fortunately for Mydas, Gridi came to a bad end in a fight with the Corsairs before he realised that Mydas had relocated his stash with the intention of keeping it.[1a]

Mydas next turned up in the service of Groccolo, prince of Verezzo, once again in charge of the gold which was to pay a vast mercenary army. Mydas defended the pay chest valiantly in several hard fought battles, assisted by his hand-picked henchmen. When the time came to pay the mercenaries, Mydas somehow managed to part with so little gold that he caused a mutiny in the camp. The Prince was promptly deposed and fled back to Verezzo. In the confusion Mydas remembered his duty to defend the pay chest and conducted a fighting retreat, fighting off entire companies of enraged mercenaries seeking their arrears of pay. As it happened, Mydas managed to retreat in a totally different direction to Verezzo, and so neither the Prince nor the mercenaries ever got the pay chest. To this day, its whereabouts is known only to Mydas.[1a]

Since that day Mydas has turned up in many lands safely beyond the bounds of Tilea, offering his services as Paymaster for mercenary armies or such tasks of tax gathering, gold counting or treasure hiding that might be required by various mighty lords. Although many of his masters have been horribly defeated due to their own dubious qualities of leadership, Mydas has never let any of the pay chests in his charge fall into the hands of the enemy; nor for that matter into the pillaging hands of the fleeing mercenaries who don't deserve to be paid for losing a battle![1a]

Mydas' bodyguard are hand-picked from among the galley slaves of the pirates of Sartosa. Every one has been personally redeemed from captivity by the generous expenditure of gold by Mydas himself, and so they are all deeply grateful and utterly loyal to their master. As well as this, they are all big, muscular, bronzed men hardened by years labouring at the oars. Each of the five to twenty bodyguards has a halberd and light armour.[1a]

Mydas's Money Lender is none other than the notorious Arabyan merchant Sheikh Yadosh. The Sheikh lent Mydas a vast fortune many years ago in Sartosa and has faithfully accompanied him ever since in the hope of repayment. In the meantime, the Sheikh earns a nice return in interest, lending money to mercenaries who are easily parted from their cash in gambling dens and other temptations and are always asking to borrow more. Sheikh Yadosh is immensely fat and his girth is greatly increased by the long cummerbund wrapped around his waist which contains many gold coins within its folds.[1a]