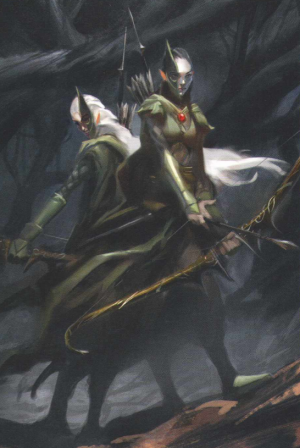 The Sisters of Twilight.

Naestra & Arahan, the Sisters of Twilight, are legendary heroes of Athel Loren,[2a] and, much like Teclis and Tyrion of Ulthuan, are Elven twins of unusual circumstance.

High in the alpine slopes of the Pine Crags, the Eyrie of Twilight dominates the skyline. Herein lie the elegant halls of Naestra and Arahan, the Sisters of Twilight. The twins are as different as night from day, not just in appearance, but in personality. Naestra’s spirit is as pure as starlight; Arahan’s as wild as an unbridled flame. While Naestra seeks battle only in pursuit of preventing greater harms, Arahan welcomes it with a wanton joy. If truth be told, Naestra always seems reproving of her sister’s deeds, though this only ever increases Arahan’s delight. Despite their differences, the twins are inseparable — never has one been sighted without the other in all the time they have dwelt in Athel Loren.

The Sisters of Twilight first appeared during the long years of Ariel’s self-imposed exile from the mortal realm, acting as her representatives upon the great council. None save for the Mage Queen know the sisters’ true origins, though there are many rumours that purport to fill this gulf. Some say that they are the splintered halves of a young Elf-maid who became lost in the Wildwoods long ago, and was remade so that she might better serve the Weave. Others recount that the twins are the darkest and lightest aspects of Ariel’s spirit made manifest, her passion and mercy split apart from her soul so that they can no longer dominate her being as they have in the past. A few stories even claim that the sisters are as divine as Ariel and Orion, but most commonplace by far are the songs and tales that claim the twins are simply Ariel’s daughters, and thus princesses of Athel Loren by right of blood and lineage.

Ultimately, however, the Wood Elves debate and retell these possibilities solely out of their love of storycraft. They know that Naestra and Arahan speak with the authority of their beloved Mage Queen; no secret of the past will ever change that. Even amongst the fey folk of Athel Loren the Sisters of Twilight are notable for an other-worldliness of spirit and manner. Any weapons the sisters touch become infused with a portion of their nature. Those wielded by Naestra become anathema to creatures of anarchy and discord, whilst Arahan’s tools of battle inflict great harm on beings with noble souls. Armed thusly, the sisters walk paths that even Waywatchers dread, and are said to tread the glades of the Dreaming Wood with as little concern as they do the eternally sunlit groves of Arranoc. Though inclined to seek battle from afar, Naestra and Arahan do not shirk the bitter press of melee should the situation require.

All of their armaments, be they arrows or blades, are crafted upon Vaul’s Anvil by no lesser hands than those of Daith. The master smith dotes upon the pair in the manner of a proud uncle, and indulges Naestra’s obsession with the perfect honing of her time-worn blade as uncomplainingly as he does Arahan’s ardent insistence at carrying a freshly-fashioned spear into each battle. No other, not even Daith’s fellow lords and ladies of the great council, can command his time so completely as the Sisters of Twilight. Yet each time the twins present the smith with a new challenge, he simply gives a small smile and returns to the fires of the forge.

A foe would be well-advised to avoid confronting the Sisters of Twilight unless he possesses absolute certainty that he can fell them both in quick succession. The harms inflicted upon one twin are inconsequential so long as the other yet draws breath; the ancient magics of the forest see the fallen sister restored within moments of the supposedly fatal event. This protection extends equally to both Naestra and Arahan, but it is inevitably the latter who gains most frequent benefit from it, and then invariably in the most spectacular of fashions. To recount but a few such occasions, Arahan has hacked her way out of the belly of a Ghorgon after being swallowed whole, emerged unscathed from a razor-sharp cloud of Dark Magic to slay its caster, and eviscerated a Vampire a heartbeat after her own decapitation.

The fleeting moments of Arahan’s ‘deaths’ are about the only times when Naestra casts aside her calm demeanour, and becomes as furious a fighter as her twin. It is impossible to say whether this is because Arahan’s wild spirit flows into her sister for those brief moments that her own body lies slain, or is simply a sibling’s natural wrath at the seeming slaughter of her kin. Whatever the cause, the consequences for the foe are inevitably bloody. Naestra’s bladework may not be as exuberant as Arahan’s, but what it lacks in brashness, it more than compensates for with lethality of precision. Indeed, the slaughter Naestra wreaks when enraged is matched in scale only by the withering disapproval with which Naestra beholds her reckless sister once the moment has passed; a disapproval that Arahan disregards as cheerfully as she does all others.

The Sisters of Twilight seldom fight from the centre of the battleline but are instead carried through the war-torn skies by one of their loyal steeds. Swift-winged Gwindalor is a wise and even-tempered ally, as would be expected of a beast whose lineage springs directly from Talyn, King of Eagles. Moreover, he has an uncanny ability to bring the twins to a position where their arrows can inflict the most harm. Ceithin-Har, by contrast, is as hot-blooded a creature as can be found in dragonkind. He thinks nothing of hurling both himself and the Sisters of Twilight into the thick of the fray where arrows can be fired at point-blank range, and blades too can do their wicked work.

Though it is sad to say, these two creatures know little fondness for each other. Gwindalor considers the dragon to be reckless and venturesome, whilst Ceithin-Har berates the eagle for his aloofness and constant caution. Different in temperament though they might be, Gwindalor and Ceithin-Har are nonetheless united by their bonds of friendship with Naestra and Arahan. Though it is doubtful that either would put himself in harm’s way for the other, both would gladly die a hundred times over in defence of their mistresses.

The Sisters of Twilight were deadly fighters individually, but together they were a devastating force upon their enemies.