From Warhammer - The Old World - Lexicanum
(Redirected from Nagarythe)
Jump to: navigation, search 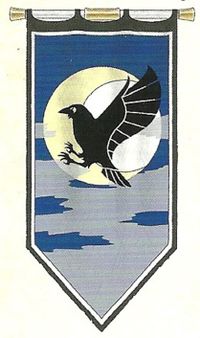 The Shadowlands is all that remains of Nagarythe, the ancestral homeland of the Dark Elves. It is located between Tiranoc and Chrace while the Annulii Mountains separate them from Ellyrion and Avelorn.

Aenarion founded Nagarythe as his own personal fiefdom after the death of his first wife Astarielle[1a][2a][3a].

In -4449 IC, the Daemon Prince of Slaanesh, Fa'vaer the Lithe secures the allegiance of many Daemons of Nurgle and invades Nagarythe killing thousands of Elves. [6a]

Ruling over the most hardened, driven and merciless warriors of his army, who became the Nagarythe, he established his court in the fortress of Anlec. Following his disappearance the realm of Nagarythe was inherited by his son Malekith.

The outbreak of the Sundering led to a division of the Nagarythe people; while the majority fought for Malekith, a minority remained loyal to the Phoenix Throne and fought for Caledor I.

At the end of the civil war, Malekith made a mad attempt to undo the Great Vortex. This led to a powerful magic backlash which quite literally ripped the land apart, leading to gigantic tsunamis which inundated and devastated large parts of Ulthuan, mainly the Northwest and especially Nagarythe.

In -1599 IC, two Black Arks are beached to form the foundations of the fortress of Anlec - a structure that provides a base for the Dakr Elves and will be destroyed and rebuilt. many times. [1c]

A large Druchii army is destroyed at the Battle of Grey Canyon in -922 IC, the armies of Tethlis continue to purge the Dark Elves from Ulthuan. [1c]

A desperate counter attack is led by Malekith, culminating with the Siege of Tor Lehan where both sides are wiped out, Anlec is destoyed and the Altar of Khaine toppled into the Sea in -696 IC. [1c]

Anlec is rebuilt again in 1131 IC as the Dark Elves move in subsequent years to besiege the Griffon Gate. [1c]

The arrival of several tribes of Shades has led to a vicious guerrilla war between the new arrivals and the local nomadic bands of Shadow Warriors[3c].

In 2413 IC and after much heated debate, the court of Finubar dispatched Prince Melenar, a Warrior-Mage and head of House Coraith to begin a campign to retake the Shadowlands. He would campaign for several years against the Dark Elves, establishing a stronghold and forming an alliance with the Shadow Warriors. [5b]

Following the death of Melenar, his son Kaldor led an invasion of the Shadowlands on behalf of the Witch king, seeking to claim the lands and slay his younger brother. [5]

Few settlements remain near the inland borders from which the few remaining archers and spearmen that guard the grim kingdom are recruited. [4a] The land has a great number of unmarked graves of dead elven warriors. There are no permanent civilian settlements with only the camps of the Shadow Warriors scattered throughout the land and watchtowers at key locations such as bridges manned by veterans. [5a]

The best known element of the military are the bands of Shadow Warriors, but limited conventional forces including Archers, Spearmen and even a few Silver Helms are also present. [4a]

Many of the Elves of Nagarythe pray to Morai-Heg for vengeance against the Dark Elves. [4a]